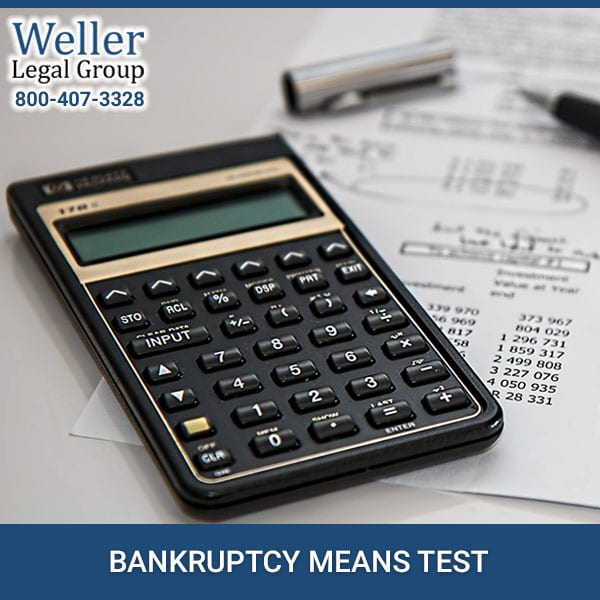 WHAT IS THE BANKRUPTCY MEANS TEST?

What income is included in the bankruptcy means test? The bankruptcy code appears to include virtually every form of income, not subject to an exemption. This includes in alphabetical order: annuity payments; gifts or family support; gross income from the operation of business, farm or other profession; interest, royalties and dividends; pension and retirement income; regular spousal or child support; rental and real property income; state disability insurance; wages, tips, salary, overtime, bonuses, and commissions; and workers compensation.

CALCULATION OF INCOME PURSUANT TO THE MEANS TEST

The debtor first determines his income for purposes of the means test by averaging his or her income for the six months prior to the month the debtor files bankruptcy, in order to arrive at the monthly disposable income. This is defined as the debtor’s Current Monthly Income or CMI. For example, if the debtor files his or her bankruptcy in November, the debtor will average the income received in the months of May, June, July, August, September, and October.

In addition, the Veteran must have a disability rating of at least 30%.

Income received in benefits issued by the Social Security Administration is exempt from the Chapter 7 bankruptcy means test. This includes both retirement benefits, and disability benefits.

Sometimes, it is obvious that the debtor has primarily business debt. A corporation, limited liability company or partnership that files bankruptcy can be usually shown to have primarily business debt. Such classification is not so obvious when an individual, in attempting to start a business, acquires debt on personal credit cards in order to fund such venture. For example, a carpenter may buy tools on his personal credit card. Another person may buy furniture for an office.

However, such distinctions are not that difficult to discern. For example, items of a personal quality are usually clearly defined. Family vacations, medical bills, clothing, school supplies, and similar items are clearly personal and consumer, in nature.

IMPORTANT FORMS IN APPLICATION OF THE MEANS TEST

There are three important forms the debtor must use in the application of the means test in Chapter 7 bankruptcy. The first form is the Form 122A-1. This form is titled, Chapter 7 Statement of Current Monthly Income. This form indicates whether the debtor’s income is below the median income for his or her State, as determined by the household or family size, of the debtor. If the debtor’s income is below the median income, the debtor does not have to take the means test. Median income, as determined by household, is determined by the Census Bureau’s Median Income Family Data. The Census Bureau periodically publishes updated Median Income Family Data, which the United States Trustee Program uses to determine median income, based upon family size. Such median income figures vary not only by family or household size, but also by the State in which the Chapter 7 bankruptcy filer resides.

The second form is Form 122A-2. This form is titled, Chapter 7 Means Test Calculation. This form calculates the debtor’s average monthly income, and allowed expenses, to determine whether the debtor has significant disposable income. Allowed expenses, such as housing, transportation, and housing, may vary dependent upon the county and metropolitan region in which the debtor resides. Administrative Expense Multipliers and IRS’s National Standards for Allowable Living Expenses and Local Standards for Transportation and Housing and Utilities Expenses determine the allowable expenses suggested by the United States Trustee Program for debtors who undertake the Chapter 7 means test.

The third form is Form 122A-1Supp. This form is titled, Statement of Exemption From Presumption of Abuse Under Section 707(b)(2). This form applies to debtors who are given special preference, and determined by law to be exempt from the means test.

MEDIAN INCOME IS FIRST ELEMENT OF THE BANKRUPTCY MEANS TEST

How household or family size is determined may depend upon the jurisdiction in which the debtor files. There are three separate tests to determine household size. The three tests are the IRS test, the household test, and the economic test.

The IRS test is the test generally applied in the Middle District of Florida, Tampa Division. The IRS test states that if you claim a dependent or if you can claim a dependent, on your federal income tax form or filing, then that dependent constitutes part of your household or family size. An individual can be a dependent if you provide more than half of the expenses of the individual. Dependents can be children up to the age of 24 if a full-time student. Dependents can exceed more than 18 years of age if disabled, either mentally or physically.

TOTALITY OF THE CIRCUMSTANCES

For debtors who overcome the means test in determining Chapter 7 eligibility, based upon income, such debtors must also present a real budget, as indicated in Schedules I and J. Schedule I of the Chapter 7 bankruptcy petition is an indication of the actual and present income of the debtor. Schedule J is a listing of the debtor or debtors’ monthly expenses. If after subtracting the monthly expenses of Schedule J from the monthly income of Schedule I, the debtor still possesses significant disposable income, the debtor may not be able to successfully navigate a Chapter 7 bankruptcy filing.

The United States Trustee, and potentially the Chapter 7 bankruptcy trustee assigned to the debtor’s case, may oppose the entry of a Discharge in the Debtor’s Chapter 7 Bankruptcy, based upon an indication that the debtor has significant disposable income to fund a Chapter 13 bankruptcy plan.

The United States Trustee, in such an action, is claiming that the filing of the Chapter 7 bankruptcy was abusive because the debtor has significant disposable income. The Chapter 7 debtor may defend such action by showing that Special Circumstances exist which are generally unusual expenses that necessitate the Chapter 7 bankruptcy filing. Such unusual expenses can include extraordinary medical bills or health issues, debtors who spend unusually large amounts of their expenses on travel, or recent unemployment.

The examination of Schedule I and J in determining whether a debtor is eligible for Chapter 7 bankruptcy based upon income, appears in many respects a more fair determination of debtor eligibility. The means test often produces unfair results based upon policies built into its operation. For example, a debtor may deduct the full mortgage on a homestead, but the renter is generally limited to the cost of comparable housing in the region. Also, the debtor who acquires significant secured debt, such as automobile loans, has an advantage in qualification over a debtor who has no automobile payment.

Although the debtor may exceed the CMI or Current Monthly Income permitted based upon the median income as determined by household size of the debtor, the debtor might still successfully complete a Chapter 7 bankruptcy based upon the real monthly income presented in Schedules I and J. An example may be a debtor that was a high earner, but recently unemployed.

Many debtors, including many bankruptcy attorneys, misunderstand the true effect of the means test. The debtor who fails the means test may still file Chapter 7 bankruptcy. However, that debtor, in order to overcome an action for abuse by the Trustee, must show that the true or real nature of his or her financial circumstances, allows for no significant disposable income available to the debtor. However, the debtor who is not able to overcome the two hurdles of the means test and the totality of the circumstances test will probably not receive a Chapter 7 Discharge.