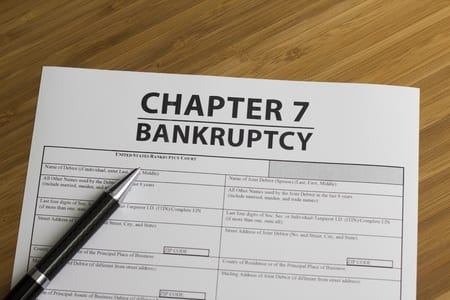 Chapter 7 of the Bankruptcy Code allows debtors to have their debts forgiven through liquidation. During this process, nonexempt assets are sold and the proceeds are distributed to creditors. Unlike Chapter 13 bankruptcy, where a debtor retains their property and pays back a portion of their debts, Chapter 7 bankruptcy discharges remaining debts so the debtor does not have to pay them. As the most common form of bankruptcy, Chapter 7 is also known as straight or ordinary bankruptcy. Chapter 7 bankruptcy is usually a voluntary process initiated by the debtor, although creditors may file an involuntary petition to force a debtor into bankruptcy under certain circumstances. Chapter 7 filings have declined a bit over the past few years and some of the most common reasons for filing involve unemployment, medical bills and divorce.

A voluntary Chapter 7 bankruptcy can be filed by a single person, business organization, or married couple under one petition. Filing this petition is not free. Bankruptcy courts charge a $245 filing fee, along with a $75 administrative fee and $15 trustee surcharge. These fees can be paid in installments, but the final payment is due within 120 days of filing. It’s important that debtors pay these fees since failure to do so can get their case dismissed. Some debtors may qualify to have their Chapter 7 filing fee waived. Debtors are not required to hire an attorney to file for bankruptcy, but they do need to undergo credit counseling in the 180 days before filing their petition.

In this petition, the debtor includes a list of schedules disclosing the amount of debt owed to each of their creditors, their current income and living expenses, and any property owned, both exempt and nonexempt. The debtor must include a certificate proving completion of credit counseling, proof of payments received from employers, and a copy of their tax return from the year before filing. Also required is confirmation that they are aware of the types of relief available through other forms of bankruptcy. It’s a federal crime to hide assets or give false information during bankruptcy proceedings, thus debtors must swear to the accuracy of their petition under oath. The petition for Chapter 7 can be dismissed if the debtor doesn’t provide the required schedules and documents listed above or if they fail to pay child support and alimony after filing. The petition can even be dismissed if the debtor is convicted of a violent crime and the victim files a motion to dismiss the bankruptcy petition.

The Bankruptcy Abuse Prevention and Consumer Protection Act of 2005 added new requirements to file for Chapter 7 bankruptcy. These include the credit counseling requirement mentioned above, and a “means test” intended to prevent abuse. Petitioners with higher incomes will often end up filing for Chapter 13 bankruptcy after completing this test, which compares a debtor’s household income to families of the same size in their geographic area. This determines whether their monthly income is above the median income. Debtors with incomes below the median income can usually file for Chapter 7 bankruptcy, while debtors above the median income are required to calculate their disposable income by subtracting living expenses approved by the IRS from their average monthly income. The debtor is ineligible for Chapter 7 bankruptcy if their disposable income exceeds the amount set by the U.S. Trustee Program. Instead, they may file for Chapter 13 bankruptcy where a repayment plan is established and debts can be adjusted. This prevents debtors with the means to repay their debts from having their debts discharged. That being said, some debtors can convert their Chapter 13 case to a Chapter 7 if their financial circumstances change or if they choose to give over nonexempt assets saved through Chapter 13 proceedings.

The bankruptcy court appoints a U.S. trustee to oversee the case. The trustee is responsible for examining the petition, selling assets, and distributing the proceeds to creditors. In return for their role in the case, the U.S. trustee receives a percentage of these proceeds. The trustee holds a meeting of creditors within 40 days after the petition is filed. These hearings are held publicly and give creditors the opportunity to question the debtor under oath. Many creditors choose not to attend unless they suspect the debtor is hiding assets, but the debtor is still required to attend. The trustee must question the debtor in the meeting to determine whether they understand the consequences of discharging debts under Chapter 7 and their ability to convert the case to a new chapter if eligible. Each creditor files a proof of claim with the clerk of the bankruptcy court within 90 days of the meeting to receive their portion of the debtor’s assets.

Next, the U.S. trustee appoints a bankruptcy trustee to collect the debtor’s assets and convert them to cash. Debtors are able to exempt certain properties from being liquidated. Bankruptcy is a federal procedure but exemptions can vary from state to state. Debtors may typically exempt up to $23,675 of equity in their residence or $47,350 if filing jointly as a married couple. However, the Florida homestead exemption allows debtors to exempt unlimited equity in their home. Federal law requires a debtor claiming a homestead exemption to have lived in that state for a minimum of two years before filing their petition. If the debtor acquired their homestead in the 40 months before filing their petition, they can only exempt up to $160,375 in equity, regardless of how generous a particular state’s homestead exemption may be. Aside from Florida, the only other states with homestead exemptions are Texas, Kansas, Iowa, South Dakota and Oklahoma. The Bankruptcy Code allows for other exemptions such as interest in a vehicle up to $3,775, personal injury recovery up to $23,675, personal property including clothing, furniture and household appliances up to $12,625 (the dollar amounts changes from year to year).

Debtors have no say in which creditors are paid first after liquidation. If they give preference to one creditor over another by transferring assets or making payments, the trustee can recover them. Debtors are also prohibited from making fraudulent transfers. If a debtor planning to file for bankruptcy tries to sell assets to a friend or family member with the agreement that these assets will be given back to the debtor after liquidation, the trustee may reverse this transfer. Secured creditors such as mortgage and car lenders are prioritized over unsecured creditors, and debtors must file a statement of intention regarding their secured collateral no later than 30 days after filing a liquidation petition. In their statement of intention, the debtor indicates which collateral they claim as exempt. The trustee is responsible for enforcing the debtor’s statement of intention within 45 days of filing. Once the secured creditors receive their portion of the debtor’s estate, unsecured creditors are paid in their order of priority under bankruptcy law. At the top of the list are claims for child support and alimony, followed next by attorney fees, courts costs and trustee fees. If the debtor owes unpaid wages earned by a claimant within 90 days of filing the petition, these creditors are paid next. Unpaid income and property taxes, claims for personal injury and death resulting from motor vehicle accidents, and the claims of other miscellaneous creditors are lower in priority.

Even after liquidation, a variety of debts can not be discharged. Examples include unpaid taxes from the two years before filing, child support, alimony, and debts owed to creditors not listed in the bankruptcy petition. Furthermore, student loans are almost never discharged in bankruptcy and the court can deny discharge for conduct violations involving the concealment or destruction of property and financial records. Since 2005, the waiting period between Chapter 7 filings has been raised from six to eight years. Debtors who file for Chapter 7 more than once in this eight year period are not granted discharge. These objections to discharge do not stop the distribution of assets during liquidation and the debtor is held responsible for any remaining debts.

There are benefits and drawbacks to declaring a Chapter 7 bankruptcy. With the exception of student loans and spousal obligations mentioned above, Chapter 7 eliminates debts with no limitation on the amount of debt discharged, and the debtor keeps their future income without a repayment plan. However, Chapter 7 damages a debtor’s credit score with the bankruptcy remaining on their credit report for 10 years. Debtors may not keep their credit cards after filing for Chapter 7 and they might have to pay certain debts including mortgage liens after other debts have been discharged. Some debtors will find it more beneficial to choose Chapter 13 if their debts are primarily nondischargeable. Chapter 13 can also be used to avoid foreclosure and the repossession of other properties. Debtors may want to avoid bankruptcy altogether and consider alternatives such as debt settlement, debt consolidation and lifestyle changes. This article is not intended as legal advice, and debtors unsure of which option to pursue should speak with an attorney to determine which option is best for them.