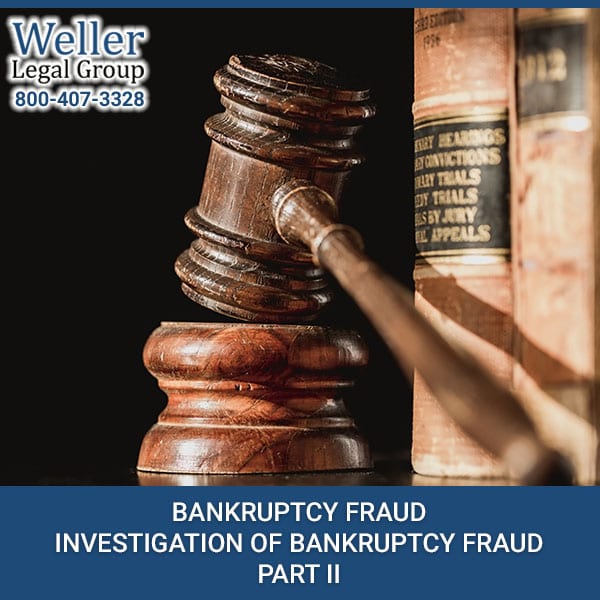 The President of the United States is ostensibly the highest officer given function of administering the federal laws of the United States. The US Department of Justice is second in the hierarchy, the US Trustee Office is third, and the Bankruptcy Trustees are the fourth level of the hierarchy, as applied in the Bankruptcy Court. These participants are part of what is referred to as the Executive Branch of the Federal Government.

A Debtor that files Bankruptcy is now demanded to produce certain documents, in addition to the Bankruptcy Petition. Among those documents are copies of the last two years tax returns filed by the Debtor, evidence of any income received by the Debtor in the last six months, six months of bank statements, and other information, including copies of automobile registrations, retirement plan summaries, and related information regarding assets, and income.

If the Debtor transferred any Property, including real or personal property, or Interest in property within two years preceding the filing of the debtor’s bankruptcy petition, there may be grounds for the Chapter 7 Bankruptcy Trustee, to seek an Avoidance of such Transfer on the grounds that the Transfer is a Fraudulent Transfer. However, under Florida Law, the Fraudulent Transfer or Conveyance Statute carries a four year Statute of Limitations. The Bankruptcy Court of the Middle District of Florida, Tampa Division applies the Florida or State Law in its interpretation of Fraudulent Transfers. Therefore, the Chapter 7 Bankruptcy Trustee will often question a Debtor whether he or she transferred any Assets within four years of filing Bankruptcy.

If the Debtor made such Transfer, then the question is whether the Debtor had the actual intention to evade his or her Creditors by transferring the Property. It is relatively rare for a Debtor to declare or show his or her actual intent to commit a Fraudulent Transfer. While it is usually difficult to find good, non-circumstantial evidence of actual intention to hinder, delay or defraud, judges will consider a list of conditions or events that are suggestive of fraudulent intent. For example, the Debtor may have transferred the title to an Asset, but retained control of the Asset. The Asset may have been transferred to an Insider, such as a spouse, family member, or business partner or friend. The Transfer may have been the Transfer of an Asset that was not Exempt, either under the applicable State or Federal Law, or the Exemptions, as applied in the assigned Bankruptcy Court. The disclosure of the Asset was hidden by such Insider or Insider, or the Debtor. The Debtor may have transferred the Asset shortly before filing Bankruptcy. While not specifically listed in section 548, many judges will consider the above referenced conditions or events in fraudulent transfer actions.

The Trustee, in his or her examination, will generally focus on whether the Debtor’s actions are illustrative of what is considered Constructive Fraud. The Bankruptcy Code holds that Constructive Fraud is evident when the Debtor transferred an Asset for less than the reasonably equivalent value of the Asset, Property or Interest and either (1) the Debtor was Insolvent at the time of the Transfer or, (2) the debtor intended to incur debts beyond his or her ability to repay the debts as they matured or, (3) the debtor was engaged in a business for which the debtor’s remaining property represented an unreasonably small capital. A Debtor is Insolvent if the Debtor has more Debt than Assets. According to the Bankruptcy Code, these two elements must be present in order to establish an implied intent to commit a Fraudulent Conveyance by the Debtor.

In addition, the Trustee is often notified of the fraudulent behavior by the Debtor by various players. For example, an ex-spouse may notify the US Trustee, the Bankruptcy Trustee, or other Officer of the Court, of Assets that the Debtor did not disclose in the Schedules of his or her Bankruptcy Petition. A business partner may question the location of property of the Debtor that has disappeared. A Creditor may have concerns about inaccurate information that the Debtor may have provided in order to procure a loan from such Creditor.

The Bankruptcy Trustee and the United States Trustee are given the opportunity to question the Debtor at the Section 341 Meeting of Creditors. In addition, the Trustee may schedule what is referred to as a Rule 2004 Examination. At the Rule 2004 Examination, the Trustee may question the Debtor in more detail. In addition, Rule 2004 can require the debtor produce responsive documents, answer interrogatories, and admit or deny requests for admissions. The Trustee is authorized to pose any material and relevant question that may affect the Debtor’s right to a Discharge, which affects the administration of the Bankruptcy Estate, or the acts, property, conduct, liabilities or financial condition of the Debtor.

Bankruptcy Fraud is a large category which brings confusion among many Debtors. Many forms of Bankruptcy Fraud come from the innocent actions of the Debtors, including in the form of Fraudulent Conveyances. In such instances, the Trustee may seek a form of recompense from either the Debtor or another party, such as the retrieval of the asset that was transferred.

Bankruptcy Fraud only rises to the level of a Bankruptcy Crime, which is punishable by either incarceration or fines, when the Debtor engages in actions that are deemed more egregious or dishonest. Such instances may include knowingly concealing assets, embezzlement, attempting to bribe an Officer of the Court, making purposely false statements, filing false claims, and knowingly filing a Bankruptcy Petition with information that is materially false.

Weller Legal Group, PA is a law firm that primarily is devoted to the representation of Debtors in Bankruptcy Proceedings, including Chapter 7 Bankruptcy and Chapter 13 Bankruptcy. Weller Legal Group PA has been devoted to the representation of Debtors, since its inception, in 1993. With offices in Clearwater, Lakeland, and Port Richey, we are generally conveniently located to most of the population of the greater Tampa Bay region.