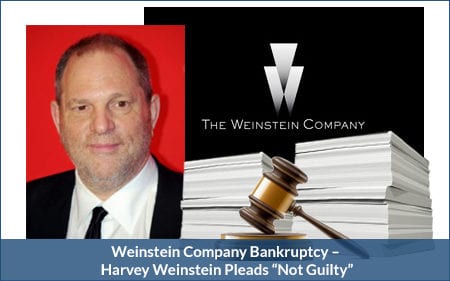 The pleas apply to one count of first-degree criminal sexual conduct and one count each of first-degree and third-degree rape. Weinstein’s attorney, Benjamin Brafman told reporters that the two sexual encounters alleged in the case were “consensual acts that do not amount to sexual criminal misconduct”.

Today’s court appearance was Weinstein’s first since his arrest on May 25, 2018 on charges that he had sexually assaulted two women in New York. The indictments in the two cases were handed down by a New York City Grand Jury last week.

Harvey Weinstein and his brother, Bob Weinstein were the co-founders of the independent film distribution company, Miramax in the late 1970’s. That company is largely credited with the “indie film revolution” that took place between the 1970’s and the 1980’s. The Weinstein’s sold Miramax to the Walt Disney Company in 1993. At the time, both brothers stayed on with Miramax as employees until they were eventually forced out of the company in 2005.

The latest direct development in the Weinstein Company Chapter 11 case came on May 1, 2018, when the company announced that it had named a Dallas, TX private equity firm – Lantern Capital Partners – as the winning bidder in its bankruptcy sale. The deal, which is still subject to confirmation by the case’s Bankruptcy judge, is worth a purported $310 million, plus the assumption of an additional $115 million in company debt.

The company has struggled over the past several months to secure a suitable buyer. The escapades and peccadillos of Harvey Weinstein are widely credited with the devaluation of Weinstein Company stocks and assets. The sale to last month’s successful bidder was to the company’s prearranged bidder – or “stalking horse” – which set a price floor that was met at auction.
According to a statement by Ivona Smith, a member of the Weinstein Company Board, “Lantern’s bid clearly achieves the highest and best value”, to which she added, “We look forward to working with Lantern to close the transaction.” Smith works for a company, Drivetrain Advisors, which is in the business of “assisting distressed companies”. Smith recently joined the Board which also includes Bob Weinstein one of the company’s co-founders.

The Lantern purchase may yet be derailed if any number of the company’s creditors successfully objects in bankruptcy court. The only other bidder to go up against Lantern in the auction was Inclusion Media. Inclusion is headed by the Broadway producer, Howard Kagan, a former partner in the hedge fund Harbinger Capital.
Inclusion Media’s bid was for $315 million total, with no additional funds offered to pay any part of the Weinstein Company’s debt which is said to exceed $100 million. During the auction, the Weinstein Company claimed that Inclusion’s bid was submitted after the submission deadline and did not meet other bidder requirements. Those factors will be weighed by the bankruptcy judge during the confirmation process.

Inclusion’s bid reportedly included the establishment of a “Harvey Weinstein Victims’ Fund” in the amount of at least $25 million. On Tuesday, May 1st, five of the plaintiffs in one of the civil cases that have been filed against Harvey Weinstein and his former company said that they “strongly opposed the sale” (to Lantern) because that transaction did not include a “settlement fund” like the one included in the Kagan group’s bid.

A lawyer for the group of plaintiffs, Elizabeth Fegan, said “We are here to show them the assault survivors will not go away quietly”. In its own statement on May 1st, the Weinstein Company responded, acknowledging that “Inclusion did claim to offer certain attractive aspects for victims”, and added, “Inclusions interest was not a bona fide offer. In furtherance of its fiduciary duty, the Board selected the bid that offered, with certainty, the most overall value”.

Now, both cases – the criminal case against Harvey Weinstein, and the bankruptcy case involving his former company – remain to be fully resolved. In the former matter, Weinstein will eventually face a jury to determine if he is guilty as charged in the indictments or if, as his attorney has stated, his actions were “consensual in nature”. In the latter matter, it will be up to the bankruptcy judge to sort out competing claims and interests to finalize that matter.