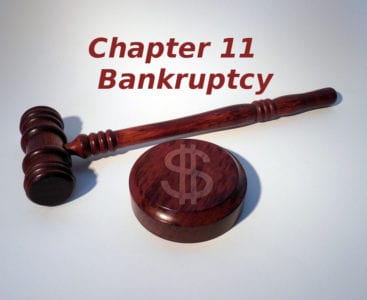 (See prior article on this blog – “Chapters in Bankruptcy, a Short Primer…”)

The number of Chapter 11 (“reorganization” bankruptcy) filings has reached an all-time high since 2011. In that year, there were 789 Chapter 11 filings as the nation was still trying to recover from the “great recession” of 2008 – 2009.

According to data from the American Bankruptcy Institute (“ABI”), the year-over-jump (that tracks the number of such filings in comparison to previous reporting periods) was the second highest to be recorded in any month since that recession. The December, 2017, year-over-jump was 366 filings – the year-over-jump for March of this year was 299.

Historically, Chapter 11 filings “peak” in conjunction with the tax season in April. The low pointsusually occur toward the end of the year in December. In March of this year new Chapter 11 filings in the nation rose sixty-three percent (63%) year-over-year since March, 2017. That was the greatest number of filings since April, 2011. Many of the recent filings (2017 through the current period) have been traditional “brick-and-mortar” operations and some of the country’s most iconic retailers. The retail sector of the economy has been particularly hard hit in the past several years.

Amongst the companies that filed for Chapter 11 protection in 2017 are:

The foregoing filings were the “big name” filings in2017. Two of those noted – Toys ‘R Us and Gymboree – were the worlds’ two largest toy retailers at the time, and both were controlled by Bain Capital, Inc., the private equity firm that was once owned solely by former Massachusetts Governor and failed 2012 GOP presidential nominee Mitt Romney.

If 2017, was a bad year for the retail industry, the current year is shaping up to be even worse. Some analysts say that the “era of big box, brick-and-mortar retailers is coming to an end with changing demographics, the advent of online shopping, and the ascendance of a few major enterprises such as Amazon, Target and Wal-Mart.”  An article posted yesterday on the zerohedge.com website stated:

for part of it (i.e. the spike in Chapter 11 filings). Retailer bankruptcies of all

sizes have been piling up in large numbers since 2016. They all started out as

Chapter 11 filings, though many of them later turn into messy liquidations, like

There is a “downside” to every Chapter 11 bankruptcy proceeding. In 2018, that downside has a new and more chilling impact on companies taking the bankruptcy route after Congress passed and Trump signed the recent “tax reform” legislation. The zerohedge.com article addressed that situation as follows:

losses in 2017 under the old corporate tax rate of 35%, thus getting the

the new tax law adds uncertainties, but shareholders and creditors knew that

losses incurred in 2018 would face the new corporate tax rate of 21%. And so

the government would only pick up 21% of their losses…”

“But in March (of this year), this logic no longer applies. So, it looks like the

arrived at the end of the “credit cycle”. The Fed is trying to push up

to have a harder time refinancing their debts. And those that succeed face

higher borrowing costs. Some sectors are getting hit harder than others,

such as brick-and-mortar retail… But this is now spreading in other sectors,

such as specialized subprime auto lenders…”

In recent years, specialized subprime auto lenders have been targeted by private equity firms such as KK&R, Bain Capital and others. But, subprime auto delinquencies, according to recent reports, have climbed to their highest rate since late 1996. Three of the leaders in this field have recently filed for Chapter 11 bankruptcy protection and other have liquidate. As one pundit put it, “…subprime auto lending as an industry may be on the verge of collapsing” – this, while allegations of fraud, misrepresentation and other dirty-dealing have been noted in several bankruptcy filings.

And, so it goes… There is a big, looming question afoot: are we seeing the beginnings of a cultural shift of great magnitude where once iconic brands are being wiped out to be replaced by the “new” way of shopping – the rise of Amazon and its ilk in favor of Toys ‘R Us and other brick-and-mortar operations of (the not-so-recent) past?