THE WEINSTEIN COMPANY FILES FOR CHAPTER 11 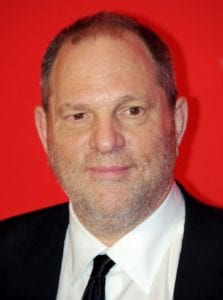 The Weinstein Company – founded by embattled movie mogul Harvey Weinstein and his brother Bob Weinstein in 2005 – has officially filed for Chapter 11 bankruptcy in a Delaware bankruptcy court. Media reports indicate that the filing occurred late in the day on Monday, March 19th.

Former company Chairman Harvey Weinstein has been under fire for serial assault, sexual harassment and rape that allegedly occurred over the course of decades. The accusations, found to be credible by many sources, led to Weinstein’s legal troubles and to the near-demise of a once formidable company in the movie industry.

The bankruptcy petition lists both assets and liabilities at somewhere between $500 million and $1 billion. The financial stability of the company has been a source of speculation since the sordid story of sexual misconduct and strong-arm tactics by Harvey Weinstein broke into the headlines late last year.

The filing also included sparse details of a deal – characterized as a “stalking horse” agreement – that may have been struck with Lantern Capital Partners to purchase the assets of The Weinstein Company. A report earlier today carried by Reuters says “The (Lantern Capital) offer will set the floor for higher and better bidders in a court-supervised auction”. An unnamed source told Variety “…the Lantern Capital deal falls in the range of $300 to $320 million…”. Another source pegs the agreement to purchase the company’s assets at $450 million, and notes “…other bidders are likely to emerge.” Either way, those sums are speculative at this point and fall well short of the $500 million to $1 billion estimates.

The embattled company has spent the past several months seeking a buyer – one deal fell through when the prospective buyer discovered that its target company has far more liabilities than it had originally disclosed.

Earlier offers to acquire some of the assets of The Weinstein Company came from Lions Gate Entertainment and Qatar-owned Miramax the company that was formerly owned by The Disney Company and founded by the Weinstein brothers in 1979. Both Lions Gate and Miramax are seen as potential bidders in the court-supervised auction.

A Weinstein Company press release announced that the company had formally released all current company employees from non-disclosure agreements previously demanded of them. The company statement added, “Nobody should be afraid to speak out or be coerced to stay quiet… Your voices have inspired a movement for change across the country…”.