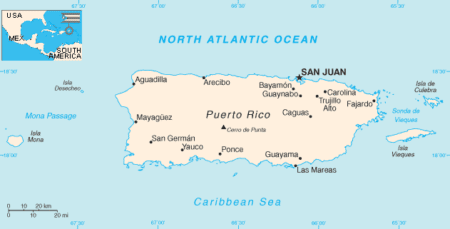 Until February, 1898, Puerto Rico had been under the colonial rule of Spain for centuries. In that year and month, Spain granted them a quasi-independent status. The welcome status under the rule of the Spanish Kingdom came with a constitution, voting rights, and a theretofore unknown sense of freedom.

The causes of the short- lived war were three-fold: Cuba’s push forindependence from Spain; growing American imperialism in the region and in other areas around the world; and, Spain’s sinking of the U.S. Battleship Maine in Havana Harbor. The Spanish-American War was one of the shortest ever waged by the United States. Active war lasted just five months – from April to August, 1898.

The Spanish-American War formally ended with the signing of the Treaty of Paris on December 10, 1898. Under the terms of the treaty Spain:

Between the end of the Spanish-American War and the beginning of World War I, Puerto Ricans were all-but-stateless people – no citizenship, no passport, no real freedom from Spanish rule, no legal standing under the United States system. That “condition” of the Puerto Rican people lasted some nineteen years between the signing of the Treaty of Paris and the enactment of the Jones-Shafroth legislation.

While poverty has been the millstone around the necks of Puerto Ricans for at least the past two or three centuries, the roots of its perpetual financial crises are of more recent origin. While the Jones-Shafroth Act of 1917 may have been a positive move in some regards, – e.g. granting Puerto Ricans a form of U.S. citizenship – it also contained several unseen negative stipulations that have not redounded to the long-term benefit of the island.

One such stipulation was the way in which Puerto Rican municipal bonds were to be treated after passage of the 1917 act.

The Jones-Shafroth Act exempted Puerto Rican municipal bonds from taxation at the local, state, and federal levels of government. This unique and singular exemption meant that from early in the twentieth century through to present times, residents (individual, corporate, and other “residents”) of the fifty U.S. states and most U.S. territories could invest in Puerto Rican bonds without paying any interest on the income generated from such investments.

Early on, huge amounts of United States’ based investment dollars began pouring in to the Island territory for the purchase of Puerto Rican municipal bonds. When the 1970’s began, the territory’s government began utilizing bond investment revenues to balance its budget. Government then – and the programs it supported – began operating day-to-day and year-to-year on borrowed money instead of actual revenues.

The uniqueness of Puerto Rico’s financial situation is founded on many factors, among them:

Other significant factors have had a highly negative impact upon Puerto Rico’s overall economy and financial condition:

Puerto Rico lost over ten percent of its population between 2007 and 2017. The hurricanes of 2017 have exacerbated that loss. Some fairly recent reports say that 200,000 Puerto Ricans fled to Florida after Hurricane Maria. Other reports put that number in excess of 300,000. Those figures just represent the number of islanders who have relocated to Florida. The numbers increase significantly when other states and locales are included in the exodus figures.

The loss of that number of residents has put further pressure on the government. The loss of revenue alone if fairly staggering, representing yet another reason why the Puerto Rican government has been seeking bankruptcy protection and exploring other dwindling alternates..

Even before the hurricanes of last year, Puerto Rico had been losing the core of its younger population for years. Finally, Puerto Rico has an aging population; birth rates have been well-below the national average today. One commentator noted, “As a consequence of emigration, Puerto Rico is aging rapidly, and more and more of the people left behind… are older and sicker or younger and dependent.” These two factors play a considerable role in a declining economy that has refused – or been unable – to reverse course over the years.

In 2006, the U.S. Congress brought to an end several significant tax breaks that had been a boon to the Puerto Rican economy for decades (see discussion of the impact of the passage and “sunsetting” of Section 936 of the U.S. Tax Code, below). That end of the special tax advantages for Puerto Rico had a heavy impact on jobs and employment on the Island. When the “great recession” ended during the Obama years, millions of jobs were added to the stateside economy. Puerto Rico has not benefitted – since 2007, it has lost over twenty percent (20%) of its jobs.

Puerto Rico’s “triple tax break” bonds have played a major role in the island’s negative and precarious financial situation. For years, municipal bond investors extended credit to Puerto Rico in capitalizing on the “triple tax break” provision of law. The lending continued in the first 10 years of the 21st century and beyond when Puerto Rico was rapidly falling into financial and economic chaos.

Beginning in 1976, Section 936 gave U.S. corporations a tax exemption on income generated from investments in United States’ territories, including Puerto Rico. Remember, Puerto Rico already had the “Triple Tax Exemption” granted near the end of World War I. The benefit to corporations that sited subsidiaries in Puerto Rico was great – income from such subsidiaries was paid to a mainland parent corporation in the form of dividends which were not subject to U.S. corporate income tax under Section 936.

Thus, an island area not naturally suited to much beyond a basic agricultural and tourist economy developed a fairly substantial manufacturing sector by attracting U.S. investment by corporations lured in by the favorable tax treatment. In the end, that “manufacturing base” turned out to be mostly illusory. In the early ‘90’s, a majority of Americans decided that Section 936 was a way for large corporations to avoid paying taxes on offshore income. When the people spoke, the government – for once? – seemed to listen.

In 1996, then-President Bill Clinton signed legislation that phased out Section 936 over the ensuing ten years, with full repeal occurring in 2006. In 1996, continued investment in Puerto Rico did not seem as attractive to U.S. corporations as it once had. By 2006, the shelter would be gone and any corporation that would keep their subsidiary in Puerto Rico would be faced with very high (and unattractive) local corporate tax rates. After repeal in 2006, new investments by U.S. corporations fell off precipitously, many subsidiaries “folded the tent and got out of town”, and Puerto Rico’s economy began to shrink annually from then to now.

Unemployment stands today at somewhere between 20% and 60%, and fewer than half the civilian population today populates the labor force. Things that were bad, got worse after the repeal of Section 936.

Another significant factor in the creation of Puerto Rico’s “current situation” – one that strikes at the heart of its government’s attempts to deal with their financial crises through bankruptcy – is Chapter 9 of the United States Bankruptcy Code. More particularly, how historically (and today) Puerto Rico has had to deal with the provisions of Chapter 9.

Unlike Chapter 7, Chapter 11, or Chapter 13, Chapter 9 is one of the lesser known types of bankruptcy. Only municipalities can utilize Chapter 9 to reorganize debt. The Bankruptcy Code defines a “municipality” as a “…political subdivision or public agency or instrumentality of a State.” A municipality seeking Chapter 9 relief must meet four basic requirements:

In May, 2017, the New York Times headlined in its DEALBOOK/Business & Policy section, “Puerto Rico Declares a Form of Bankruptcy” (emphasis added). The article, by NYT business reporter Mary Williams Walsh began: “With its creditors at its heels and its coffers depleted, Puerto Rico sought what is essentially bankruptcy relief in federal court on Wednesday (May 3, 2017), the first time in history that an American state or territory had taken the extraordinary measure…”.

The “form of bankruptcy” available to Puerto Rico is a bastardized form somewhat based on Chapter 9 bankruptcy that is available to U.S. municipalities. On May 1, 2017, Puerto Rico was scheduled to pay bondholders $422 million – a sum that the island government did not then have. At the time, Puerto Rico’s debt and pension obligations were a staggering $123 billion + made up of approximately $74 billion in bond debt and $49 billion in unfunded pension obligations.

In comparison, Detroit’s bankruptcy in 2013 covered a “mere” $18 billion in debt; Detroit is a “municipality” under Chapter 9 and relief for that troubled city was readily available under the bankruptcy code.

It seems that Puerto Rico (and the District of Columbia) were specifically excluded from Chapter 9 protections back in 1984. Up until 1984, Puerto Rico could have availed itself of Chapter 9 relief. The 1984 House bill (H.R. 5174) was meant to “repair” the bankruptcy court system which many, mainly conservatives, felt was “broken”. The “fix” included a change in the meaning of “state” for Chapter 9 purposes. The provision read:

“…’State’ includes the District of Columbia and Puerto Rico,

Chapter 9 of this title” (emphasis added)

South Carolina Senator Strom Thurmond stated that Puerto Rico was a “state” for purposes of Chapter 9 debtor status. Between 1979 and 1984, several other attempts were made to fix the code – but Puerto Rico’s status as a “state” did not change with those attempts – until 1984.

Puerto Rico’s creditors were not pleased with the enactment of the new law (called “Promesa”) and have fought tooth-and-nail to overturn it. So far, to no avail. Puerto Rico’s case is the first to be considered under the enactment and progressives are hopeful that its provisions will “avert a humanitarian crisis” in the territory. Republicans in Congress have staunchly opposed debt relief for Puerto Rico, arguing that “…the island has long received big federal subsidies for its health system, public housing and other works. (The government in Puerto Rico) should explain what it has done with that money before getting any further federal help.”

Likewise, the Trump administration signaled its opposition to debt relief – in late April, 2017, the President went on record via Twitter and said: “NO ‘bailout’ for Puerto Rico.”

Between May to December, 2017, Puerto Rico fought hard in the Promesa proceedings to come to agreement with many of its creditors, to restructure its massive debt, and try to find a way forward. During that period, it reached only one agreement with a creditor holding about $9 billion in bond debt. At the same time, another major bond holding creditor, Aurelius Capital Management, petitioned a federal judge to toss the bankruptcy-like proceedings in a challenge to the constitutionality of the board overseeing the territory’s finances.