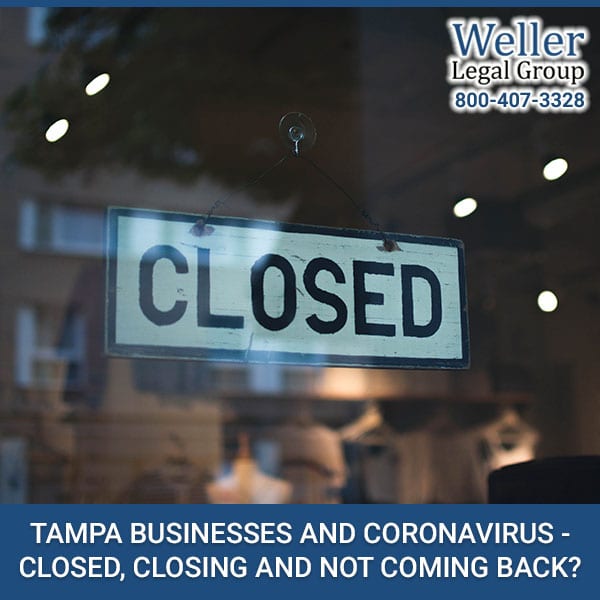 Due to the reaction, both public and private, to what is described as the coronavirus pandemic, many businesses in the Tampa and greater Hillsborough County region, are closed. Many of the small businesses, particularly the small, family owned restaurants, are perhaps, permanently closed.

Most small businesses generally operate on very thin margins. The taxes, regulations, and accelerating costs of operation have made the creation and continuation of many small businesses, largely untenable. The response to what is described as the coronavirus pandemic, whether through the influence of the reporting by the media on the general population, governmental action, and the closures of businesses, whether voluntarily or involuntarily, has been the death knell for many small businesses.

The Tampa and Hillsborough County region is replete with many vacant storefronts, former restaurants, and buildings. One may make their own investigation, by driving through various commercial portions of Tampa, to discern the truth of this statement.

However, there is hope within the economic destruction imposed on many of the residents of Tampa and Hillsborough County. Yes. Your loss of employment, or even the loss of the business that you created, is a great hardship. But, from hardship one can forge a stronger and resolute personage.

For some, the extended time in which their daily activities were interrupted, became an opportunity to examine many things, not only about the nature of the system in which they dwell but also more detailed personal criticism.

For those who engage as a sole proprietor or small business owner, these moments are especially profound. Such persons are among the last of the people for whom such concepts as freedom and self-determination have great and real meaning.

For most small business owners, especially those who have endured and continued, or even flourished financially, in their business operations for numerous years, the primary reason they have continued, despite large obstacles is because they value freedom over servitude. For a small business owner, the ability to endure and continue is the mark of success. Financial reward is secondary. Freedom, albeit not in its absolute form, is their primary impetus.

So, these are a special breed of humans. They will always find a way. They generally have the essential drive and motivation, fortitude, courage, and skills necessary to survive and endure.

So, are these small business owners gone and never coming back? Perhaps, but what percentage will decide not to come back based on a logical assessment that it is just not worth it.

Such Tampa business owners may decide that their talents, intelligence, and energy could be more productively devoted to other activities and efforts. This may mean separating themselves from a system which to them appears not only not supportive, but even punitive.

So, as such business owners vanish, so will Tampa, and other cities and localities, diminish. Small business owners create most of the jobs in the United States. There will be a further centralization of every form of industry. The quality of products and services will continually become worse. This is not a prediction. One can find numerous instances where such actions or events have brought such results.

The demise of the small business also portends a diminishing culture, and community among the population. Again, this not a prediction. One can find this in many examples in the United States, for the engines of centralization were started many decades ago.