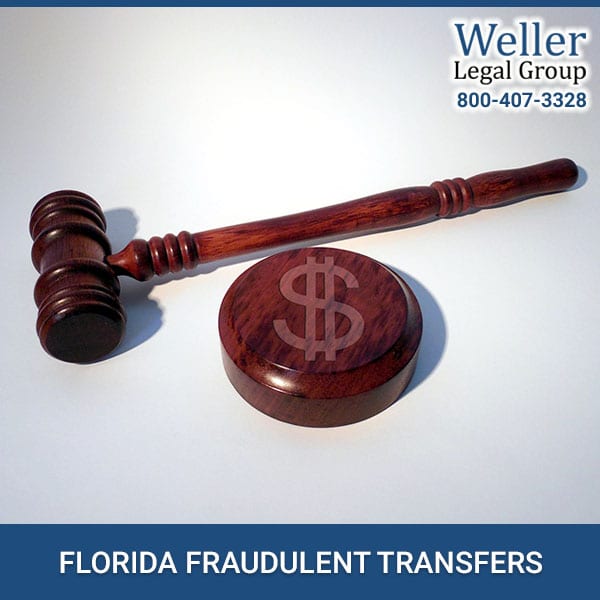 Florida has a statutory provision, formally referred to as the Uniform Fraudulent Transfer Act. (726.101)

Florida Statute 726.105 governs when transfers are considered fraudulent as to present and future creditors.

These ELEMENTS must be present for a transfer to be considered fraudulent:

ACTUAL INTENT to hinder, delay, or defraud any creditor of the debtor

Intended to incur, or believed or reasonably should have believed that he or she would incur,
debts beyond his or her ability to pay as they become due

Therefore, in determining whether a TRANSFER is considered FRAUDULENT under the Florida Statute, the Courts will consider whether ACTUAL or CONSTRUCTIVE INTENT exists. A Creditor outside of Bankruptcy can bring an action against a Debtor, to seek to void any transfer that may be deemed to be a Fraudulent Transfer under Section 726 of the Florida Statutes. In Bankruptcy, the Bankruptcy Trustee may seek to avoid certain transfers by employing the same Statute.

Florida Statute 726.110 Extinguishment of cause of action refers to what is commonly called the Statute of Limitations. Certain lawsuits must be brought within a prescribed period of time. One of the defenses available to the Debtor is that the action brought by the Creditor exceeds the allowable time period prescribed by the Statute of Limitations.

One should carefully read the Florida Statutes, because the Statute of Limitations differs in cases in which ACTUAL versus CONSTRUCTIVE INTENT is present. Florida Statute 726.110(1) states that under section 726.105(1)(a), which addresses ACTUAL INTENT, an action must be brought within 4 years after the transfer was made or obligation incurred or if later, within one year after the transfer or obligation was or could reasonably have been discovered by the Creditor or claimant.

Florida Statute section 726.101(1)(b), which pertains to CONSTRUCTIVE INTENT, permits a 4 year Statute of Limitations, without the additional 1 year provision for when the transfer could reasonably been discovered by the Creditor or claimant. Florida Statute section 726.106(1) pertains to transfers made as to present creditors. Any actions brought pursuant to this section is also restricted by a four year Statute of Limitations.