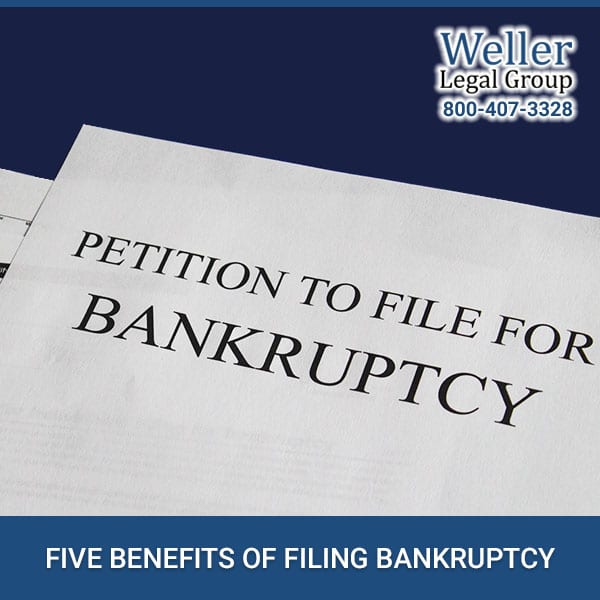 Each year, a multitude of individuals, families, and small businesses are faced with the decision as to whether or not Chapter 7 Bankruptcy is a viable course of action.

Alternatively, a Chapter 13 filing may be a better course of action for some who may not qualify for Chapter 7 relief.

And, for some businesses and certain individuals, a Chapter 11 petition may be the right course of action.

In any given situation, one of the three may be the better decision depending upon a number of factors.

This article will explore the propositionposed in the title while offering five benefits of filing under one of the more common bankruptcy chapters.

Before proceeding to the significant part, a brief introduction to the three bankruptcy Chapters may be useful to the reader:

Individuals and businesses faced with overwhelming debts may – as a final solution – choose to file for bankruptcy as a “last resort”. Under the U.S. Bankruptcy Code there are several variations – “Chapters” – with differing provisions. People on the verge of filing under one of the Chapters should know the major options that may be available to them under the code.

The three most common bankruptcy provisions in the United states are Chapter 7, Chapter 11, and Chapter 13.

5 Benefits of Filing for Bankruptcy

Benefit #1: In a 2013 article posted online by Business News Daily, the author stated:

Bankruptcy is a legal process whereby individuals or businesses

can publicly declare that they are unable to pay all their bills, as a

way to help then get out from under their debt. Bankruptcy laws

help people and businesses get a fresh start financially(emphasis

debts, (e.g. Chapter 7) or by creating a reorganization plan. (e.g.

In Chapter 7 bankruptcy, then, a major benefit of taking the bankruptcy route for individuals burdened by heavy debt is the liquidation feature that erases eligible obligations that would otherwise have to be paid.

At the end of the Chapter 7 process, the “discharge of debt” allows the debtor to gain a fresh financial start without the continued stress of dealing with collection calls, threats, and the possibility of lawsuits.

The obvious benefit of a Chapter 7 bankruptcy is that your bills “go away”. This applies to most credit card debt (the single most pervasive type of debt for those in need of bankruptcy), old medical bills, and other unsecured debt.

In a Chapter 11 or Chapter 13 bankruptcy, the ability to “reorganize debt” via a Court-sanctioned reorganization plan allows the filing debtors to at least “get a handle” on their burdensome debt and arrange to pay it down, over time, with terms more favorable to the debtors.

To recap, Chapter 7’s “liquidation” provisions are a great benefit for debtors who are inundated with debt and who have stood the test of creditor and collection efforts prior to filing a petition. Likewise the “reorganization” provisions in Chapters 11 and 13 are advantageous to some individuals and businesses that are burdened with overwhelming debt.

Benefit #2: Throughout the bankruptcy process – whether Chapter 7, Chapter 11, or Chapter 13 – debtors are protected by the Court from any legal action that creditors may try to impose. In some types of bankruptcy, a debtor’s property is protected from being seized or liquidated. Finally, bankruptcy laws also protect debtors from discrimination – i.e. an employer is estopped from firing a debtor simply because of a bankruptcy filing.

A very significant benefit in any bankruptcy proceeding is the automatic stay provisions in the Bankruptcy Code.

In United States Bankruptcy law, an automatic stay is an

automatic injunction that halts actions by creditors, with

certain exceptions, to collect debts from a debtor who has

declared bankruptcy. Under Section 362 of the United

States Bankruptcy Code, the stay begins at the moment

The automatic stay works to the advantage of debtors who have filed for bankruptcy, but it is not absolute. For instance, a secured creditor may be able to have the Bankruptcy Court “lift” the stay upon a showing of cause. Sufficient cause could be that a stay in legal proceedings or collection efforts might not give such creditor “adequate protection”, such as where the stay prevents a creditor from protecting his interest in certain property.

The automatic stay works to protect the debtor in bankruptcy against certain actions by creditors, including:

An automatic stay in bankruptcy also has the following beneficial effects for debtors who have filed a petition:

While a stay of collection and legal efforts against a debtor is of great benefit to the debtor, the law does impose some restrictions on the injunctive process. The term “automatic” highlights the fact that the stay usually does not require the action of a Judge or court to take effect – it becomes effective upon the filing of the petition.

In fact, while the stay is usually automatic it does not apply to certain actions, can be delayed,or not go into effect at all, does not last forever, and, can be lifted by the bankruptcy court for “good cause”.

There is a serial filers’ exception to the automatic stay. A “serial filing” is where the debtor files two (or, in some cases, three) bankruptcy cases within a year’s period of time. With a second filing within a year, the stay in the second proceeding lasts for just thirty days. In the case of the filing of three cases in a year, an automatic stay will not obtain with the filing of a third petition.

Benefit #3: The notion of “having good credit” is one that is important in the everyday lives of people. Bad credit not only stigmatizes people, it has several other negative effects that can hamper a person’s life and livelihood.

A primary benefit to going through bankruptcy is that one’s credit score (along with a credit record and reputation) may eventually transition from “no credit” to “poor” to “fair” to “good” and, eventually, to “exceptional”.

Restoration of credit can begin with the process of going through bankruptcy; once a bankruptcy has ended, the real work of building and maintaining a sterling credit reputation and record begins.

In today’s world, a person’s credit score is a defining characteristic and indicator of his credit worthiness. Credit scores are calculations based upon, among other things, payment history, number of accounts, andamounts owed. A person’s credit score will determine interest rate levels on credit and may also be determinative as to whether or not credit is granted or denied.

A credit score is a number (between 300 – “poor” and 850 “exceptional”) that reflects the risk a lender takes when a debtor borrows money. There are two credit score measures: one is a FICO Score (created by the Fair Isaac Corporation) and the other is the VantageScore (a score created by a consortium of the three major credit reporting agencies, Transunion, Equifax, and Experian). The use and effects of either measure are similar.

When rebuilding credit post-bankruptcy, it is vitally important to take it one-step-at-a-time.

First, one should obtain a free copy of his credit score from each of the three major reporting agencies. Second, a careful scrutiny of the report is in order to search out and remove erroneous information, duplicate entries, and outdated items. Third, pay attention to “good credit” habits such as not overspending, making payments on time (every time), avoiding making just the “minimum due” payment when payments are due, and NEVER missing or skipping a payment.

As was noted on the Investopedia website: “A credit score is based on a variety of factors and can be used to determine whether you will qualify to borrow money as well as the terms (offered). Consistently paying bills on time and in full will help prevent damage to a credit score.”

Regaining a “good” or “very good” credit score post-bankruptcy is definitely a benefit.

Benefit #4: An adjunct to the automatic stay benefit that accompanies bankruptcy is the fact that a debtor benefits greatly when the collection calls (and other forms of creditor “harassment”) cease. One would most likely have had to have gone through months of ceaseless phone calls, threatening letters, and the like to appreciate this as a “benefit” of filing for bankruptcy. While many bankrupt debtors cite the automatic stay provision as the #1 benefit of filing for bankruptcy, others point to the stay’s effect as a primary advantage of “taking the leap” to file.

Benefit #5: Having poor credit and owing more than one can repay can be a burden that drives people to their “last resort” – filing for bankruptcy.

Post-bankruptcy, there are several ancillary benefits that one obtains, as follows (*):

Upon filing for bankruptcy, such feelings stop immediately.

Post-bankruptcy, the worrying about bills that are overdue, or about endless collection calls, stop immediately – as should the fights and bickering over money