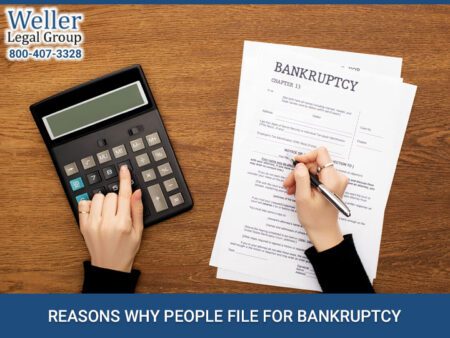 If you conduct the surveys and counseling sessions properly you will find that the overwhelming reason to file bankruptcy is the lack of income due to unemployment. Before the great recession, this group of bankruptcy filers constituted around 35% of the filers. But due to the severe problems induced by the great recession, this figure reached the 42% mark for all filers. Although controlled consumer spending and emergency saving funds can mitigate most cases of bankruptcies resulting out of unemployment. Consumer bankruptcies were not even an issue in 2005.

It was recently discovered that after the great recession and the recovery after that, a quarter of the filers indicate overuse of credit cards and overspending was the reason for seeking bankruptcy protection. Bad personal finance choices have conventionally been a problem faced during a bankruptcy filing. Typically, more so in consumer-driven economies. With the strengthening of the economy, there is a rise in consumer confidence. They start overusing their credit cards and spend more than their monthly income. As the economic condition starts to deteriorate, these consumers have no savings left to help them out.

It will not be a surprise for any American adults to find out that insurance coverage and other healthcare costs have increased dramatically in the last twenty years. Due to this, rise in household financial responsibilities for medical emergencies and drug costs, medical expenses have emerged as the top reason for rising bankruptcy rates. But other surveys from more reliable sources indicate that just one out of five filers cite medical debts as the reason for their financial crisis.

If a person has gone through a divorce, it does not necessarily mean that this is the top reason for bankruptcy. There are people out there who never had to face divorce and they will be surprised that divorce is one of the top reasons for a bankruptcy filing. If you consider this rationally, divorce adds a financial burden on both parties involved. The household expenses that used to be a single set are now divided into a couple of sets. And there is little change in the overall income. The debts incurred during the marriage can be the responsibility of either a single or both parties. It depends on the situation. During the proceedings, both parties can agree to a divorce decree. This will delineate the responsibility of both parties in the repayment of debt after the divorce. But, in reality, one of the ex-spouses can stop the repayment as required by the decree.

Even though the surveys indicate that only one out of a hundred bankruptcy filings is due to addictions, there is common agreement that few people are self-reporting the real reason. Some of these addictions can be in the form of gambling or substance abuse. There is a discrepancy in the reported figures, especially for the gambling addicts. It is suspected that the actual bankruptcy cases as a result of gambling addiction are likely to range from five to ten percent. Unfortunately, bankruptcy filing in these circumstances is more of a bandage rather than a full cure. A person even after filing for bankruptcy may continue to struggle with addiction. This often leads to more financial struggle and there is no relief from the bankruptcy problems. Keep in mind that the chapter 7 filings are allowed only once in eight years.

For the people considering declaring bankruptcy or those struggling to save their homes, wages, vehicles, and other assets, it is recommended that you consult with a professional attorney that specializes in bankruptcy law. If you live in Tampa, Fl area, one of the best go-to places for this will be Weller Legal Group as they offer experience and expertise.