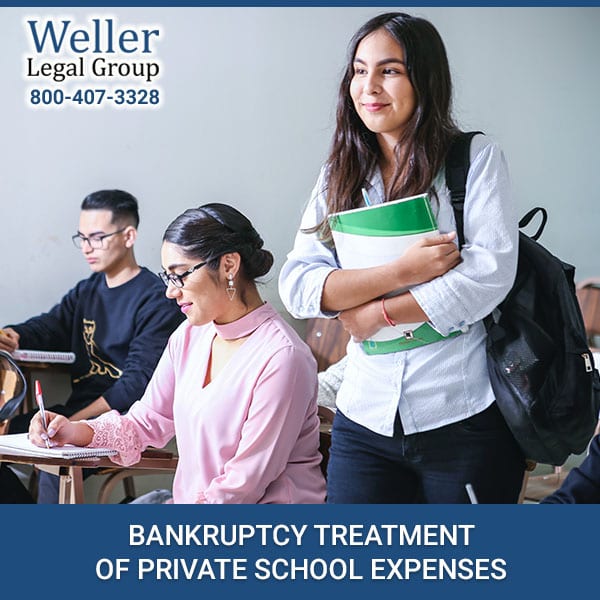 INTRODUCTION
Parents may seek to matriculate their minor children in private schools for various reasons, including religious purposes, lack of confidence in the available public schools, and alternatively, the belief that the available private school offers a better education than the pertinent public school. The question in arises, in Bankruptcy, as to whether the debtor may deduct his or her expenses related to the debtor’s child or children’s private school enrollment. The ability to deduct such expenses may determine whether the debtor is able to file Chapter 7 Bankruptcy, or the payment required by the debtor in a Chapter 13 Bankruptcy.

The Bankruptcy decisions show a reluctance among the judges to permit private school expenses as an allowable deduction. However, there are numerous instances in which such deduction was permitted.

The line of cases that have found such private expenses to be reasonable and necessary have tended to have the following facts or situations present:

SAMPLING OF CASES RELATED TO PRIVATE SCHOOL EXPENSES IN BANKRUPTCY

A mere preference for private school is not sufficient (In Re Golematis).

Private school tuition is found to be a special circumstance, wherein the child was enrolled in the school which offered special treatment for ADHD and auditory deficiencies (In Re Brown)

In Re Cleary, the Court held enrollment in a private Catholic School was an allowable expense, not limited to the statutory ceiling of 11 USC 707(b)(2), where the family were members of the Catholic Church, the mother received a Catholic education, and worked solely to pay the tuition costs associated with the children’s enrollment in private school. Other factors were present, including the poor academic reputation of the local public schools, and the reduction of other expenses, in order to afford the private school costs.

However, In Re Watson held that the Religious Freedom Restoration Act did not preclude a Bankruptcy Judge from disallowing the expense relating to enrollment in a private Catholic School because “education at a parochial school is not such a Catholic central belief or practice, in that the Catholic Church does not mandate it”. Therefore, the government action does not substantially burden a person’s right to exercise his or her religion.

A case in the Middle District of Florida, In Re Burgos, held that the children’s enrollment in a Christian School was a “reasonably necessary” (not the difference in language) where the children were only enrolled in the private school, the family had strong religious beliefs, and the debtors had no other real estate other than their Homestead. In addition, because of the children’s enrollment at the time credit was extended by the debtors’ creditors, the creditors could have reasonably anticipated such expenses, in the extension of credit.