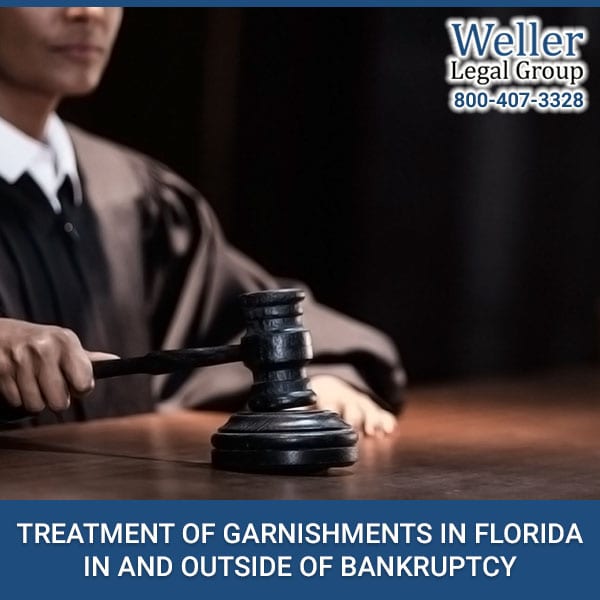 Garnishment of property or wages for unpaid debts can make a difficult financial situation even harder. In Florida, the rules and procedures of garnishment are controlled by Florida Statute Chapter 77, as well as the federal Consumer Credit Protection Act at 15 U.S. Code § 1673

Specific rules for garnishment apply to special kinds of debts like back taxes, student loans, and domestic support obligations (child support and alimony). In Florida, anyone who sues to recover a debt or obtains a judgement against another party has a right to a Writ of Garnishment. Depending on the kind of creditor or debt, a Writ of Garnishment can be issued either pre-judgement during a suit or post-judgement after a court order has been entered, but the effect is the same for both. This article seeks to explore the rules of garnishment in Florida, the kinds of things that may be exempt from garnishment, and the special effect bankruptcy proceedings have on garnishment actions.

Garnishment is a process wherein a creditor who has sued a debtor for default on a debt obtains a writ to seize money or personal property from a third-party to satisfy the debt. The third-party, called the garnishee, is someone who holds money or property that would ordinarily be due to the debtor (i.e. the garnishee themselves has a “debt” they owe to the debtor in the form of wages or held property). Typically, the garnishee is either the debtor’s employer or their bank. Upon issuance of a Writ of Garnishment, the garnishee will instead turn over a specific portion of the money or property they hold to the creditor, who applies it towards the outstanding debt. A Writ will last until a judgement amount is satisfied or until a new court order is issued. The funds/property to be garnished must be located inside the state of Florida. Stansell v. Revolutionary Armed Forces of Colombia, 149 F. Supp. 3d 1337 (M.D. Fla. 2015).

Florida has long recognized that the garnishment process requires “strict adherence” to the procedures and timelines within Chapter 77 of the Florida Statutes; if a creditor fails to follow these requirements to the letter, a Writ of Garnishment may be subject to dissolution solely for procedural defects. Zivitz v. Zivitz, 16 So. 3d 841, 847 (Fla. Dist. Ct. App. 2009); Feliciano v. Safe Hurricane Shutters, Inc., 2013 WL 5676919 (S.D. Fla. 2013).

A pre-judgement writ is one obtained before judgement occurs in the underlying action regarding the debt. Florida Statute 77.031 controls this kind of writ.

To obtain a pre-judgement writ, the creditor must file a motion or affidavit stating that the debt in the underlying action is “just, due, and unpaid”, that garnishment is not being used as a tool to injure other parties, and that the creditor believes that the debtor will not have property sufficient to satisfy the creditor’s claim by the time the case is resolved and judgement issued. The creditor must also provide bond worth at least twice the amount of the claim.

Once the creditor has filed their motion or affidavit and provided bond, a Writ of Garnishment is issued. Under Florida Statute 77.07, the debtor may move to dissolve the writ and obtain a hearing; the Writ of Garnishment will be dissolved unless the creditor can prove the allegations made in their motion and that there is a “reasonable probability” that final judgement will be made in their favor.

Florida Statute 77.03 controls post-judgement writs, those issued after judgement has already been entered in the underlying action. For this kind of writ, the process is more straightforward: the creditor files a motion stating the judgement amount, and the Writ of Garnishment is then issued.

As with pre-judgement writs, the debtor may move to dissolve the writ and obtain a hearing under Florida Statute 77.07; here, the writ will be dissolved unless the creditor proves the allegations made in their motion.

After the issuance of either kind of writ, notice must be served on both the debtor and the garnishee(s).

The Claim of Exemption Form gives the debtor the opportunity to claim property as being exempt from garnishment. Exemptions include Federal and state benefits, such as Social Security, Supplemental Security Income, and public assistance or welfare, as well as an exemption for the Head of Household; see “Garnishment Exemptions” below. The debtor must use the Form to claim any applicable exemptions and to obtain a hearing to determine validity of their claims. If the creditor does not file an answer to the debtor’s claimed exemption(s) within 8 (hand delivery) or 14 (mail service) business days, the writ will be automatically dissolved.

A specific kind of writ, called a Continuing Writ of Garnishment Against Salary or Wages in Florida Statute 77.0305, is issued for the garnishment of a debtor’s wages. For this kind of writ, the garnishee is debtor’s employer; they are required to turn over to the creditor a specified portion of debtor’s salary/wages as they become due to the debtor.

Under Florida and Federal law, there are several exemptions that may prevent garnishment from occurring.

First, there is the Head of Family or Head of Household Exemption under Florida Statute 222.11. A Head of Household is defined as someone who is providing more than half of the support of a child or other dependent. If this Head of Household has earnings that total $750.00 per week or less, their earnings are exempt from garnishment. If they have earnings that exceed $750.00 per week, a creditor can only garnish earnings if the debtor has signed a waiver giving the creditor that right; often, such waivers are found in the contract that began the creditor-debtor relationship. Even if the debtor has signed the waiver, the creditor can only garnish 25% of the earnings made that exceed $750.00.

Even if someone does not meet the Head of Family definition, the federal Consumer Credit Protection Act limits how much can be garnished from one’s earnings; creditors cannot garnish more than 25% of one’s wages or more than thirty times the federal minimum wage, whichever is less. 15 U.S. Code § 1673.

Finally, many federal and state benefits are generally exempt from garnishment. Such benefits include Social Security benefits, Supplemental Security Income benefits, public assistance or “welfare”, Workers’ Compensation, unemployment benefits, veterans’ benefits, retirement/pension benefits, life insurance benefits, and disability income benefits. In Florida, to claim any of these exemptions or the Head of Household exemption, the debtor must

complete and file a Claim of Exemption Form found in Fla. Stat. 77.041. However, these kinds of benefits may potentially be able to be garnished for special kinds of debts like domestic support obligations (alimony and child support), unpaid taxes owed to the Internal Revenue Service, and defaults on student loans.

Note, however, that the automatic stay may be shortened or eliminated altogether in some cases; the automatic stay will last for only the first 30 days of the case if one filed for bankruptcy within the last year and will not occur at all if one filed for bankruptcy two or more times within the last year. As such, garnishment may be put on hold only for the first 30 days of the case or may not be stopped at all depending on individual circumstances.

In bankruptcy, payments (like garnishments) made to creditors within the 90-day period prior to the bankruptcy filing can be considered preferential transfers and may be voidable under 11 U.S. Code § 547 if they meet certain requirements:

If the garnishments satisfy these requirements and are thus a voidable preference, that money will go back either to the bankruptcy trustee (to be distributed among all creditors as part of the bankruptcy estate) or, if the trustee does not claim it, the debtor themselves. Tardif v. Congro Finanz AG (In re Engler), 394 B.R. 598, 2008 Bankr. LEXIS 2451.

To satisfy court-ordered child support and alimony payments, up to 60% of an employee’s wages may be garnished; if the employee is supporting another spouse or child, up to 50% of their wages may be garnished. In the bankruptcy context, domestic support obligations are considered non-dischargeable and are not stopped by the automatic stay; these obligations and any accompanying wage garnishment will still occur during and after a bankruptcy case.

Up to 15% of a person’s disposable earnings may be garnished to satisfy defaults on federal student loans. In bankruptcy, the automatic stay will put a temporary stop to these garnishments; however, the garnishments will resume after the bankruptcy case ends unless the debtor meets the very strict requirements for student loan discharge.

Garnishment by the Internal Revenue Service for federal tax debt is not limited by the Consumer Credit Protection Act and is determined by the IRS on an individual basis. In bankruptcy, the automatic stay will put a temporary stop to tax garnishment, but will resume after the bankruptcy case ends unless the debtor meets strict discharge requirements.

We at The Weller Legal group hope that the information provided to you in this article helped educate you on the topic of garnishment and how it could potentially apply to your bankruptcy concerns. If you are planning to file for bankruptcy in the near future and have concerns regarding student loan obligations in bankruptcy or believe you may qualify for the Student Loan Modification program, we at The Weller Legal Group have over 20 years of experience in helping our clients with their bankruptcies and improving their credit scores. We have offices located all throughout Florida, including Clearwater, Port Richey, and Lakeland. If you have any additional questions in regard to filing for bankruptcy or working on improving your credit score in the near future feel free to give us a call today at 1-800-407-3328.