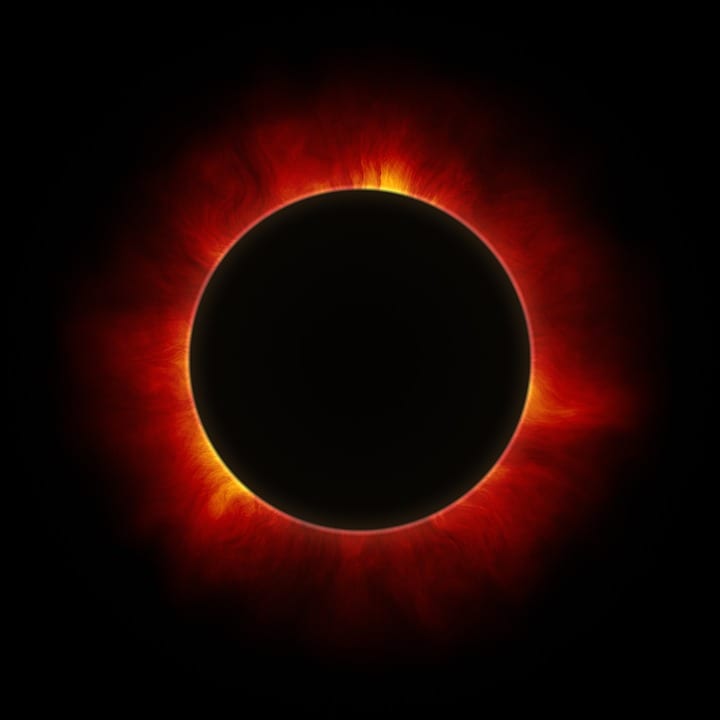 According to an article entitled, “Everything You Need To Know About The 2017 Solar Eclipse” by Leanna Garfield for Business Insider,  if you are viewing this solar eclipse within its path of totality, the sky will turn fully dark for a few minutes in the afternoon, and the temperature will decline.  The Moon and the Sun will appear approximately equal in size.

According to the same article, the total solar eclipse of August, 2017 will begin in Oregon at 10:16 AM Pacific Time and terminate in South Carolina at 2:49 PM Eastern Time.  The total time of the eclipse, as it travels across the contiguous United States is approximately one hour and 33 minutes.

A future total solar eclipse will revisit the United States in April, 2025 and August, 2025.  Annular solar eclipses, where the size of the Moon appears smaller than the Sun, are predicted to occur in October, 2023 and June, 2048.

Herodotus reported a solar eclipse at Sparta during the second Persian invasion of Greece.  The eclipse is deemed to have occurred on August 1, 447 BC, which does not match the usual date produced by many historians as the date of the invasion.

The Chinese have reported solar eclipses dating to 720 BC.  In the Fourth Century BC, Shi Shen predicted the occurrence of eclipses by determining the relative positions of the Sun and Moon.

ROTATION OF EARTH AND MOON

According to the heliocentric model, the Moon revolves around the Earth, and the Earth revolves around the Sun.   Wikipedia states that the Earth spins on its axis in a counter-clockwise rotation.  Counter-clockwise is a direction of West to East.  As the Earth spins upon its axis, in a direction of East to West, the light of the Sun “meets” the Earth first in the East and subsequently, in the West.  This explains, according to the heliocentric model, why the Sun “rises” in the East and “sets” in the West.

The Moon revolves around the Earth in a counter-clockwise direction.  For this reason, according to the heliocentric model, the Moon also appears to travel in a direction of East to West.   This is the description presented in not only Wikipedia but in probably every school, college and university in the western world, at a minimum.  It is the opinion of most mainstream scientists in what is considered western civilization.

This view of a Sun that appears first in the East and moves Westward, in conjunction with a Moon that has a similar appearance of an object that moves from East to West, is agreed upon by all observers of astronomical movement.  Those who disavow the heliocentric model and subscribe to the flat earth model, agree that the Sun and the Moon, in respect to the Earth, move or appear to move, in such a fashion.  The difference is that the adherents of the flat earth model contend that the Earth is stationary and fixed, and that the Sun and the Moon move in a East to West direction over the stationary Earth.

However, the predictability of eclipses is wholly independent of whether one applies a heliocentric model or flat earth model.  Wrote Dr. Samuel Rowbotham in “Zetetic Astronomy, Earth Not A Globe”:

“Those who are unacquainted with the methods of calculating eclipses and other phenomena are prone to look upon the correctness of such calculations as powerful arguments in favour of the doctrine of the earth’s rotundity and the Newtonian philosophy, generally.  One of the most pitiful manifestations of ignorance of the true nature of theoretical astronomy is the ardent inquiry so often made, ‘How is it possible for that system to be false, which enables its professors to calculate to a second of time both solar and lunar eclipses for hundreds of years to come?’  The supposition that such calculations are an essential part of the Newtonian or any other theory is entirely gratuitous, and exceedingly fallacious and misleading.  Whatever theory is adopted, or if all theories are discarded, the same calculations can be made”.

“The Chaldeans used to predict the eclipses three thousand years ago with a degree of accuracy that is only surpassed by seconds in these days because we have wonderful clocks which they had not.  Yet they had an entirely different theory of the universe than we have.  The fact is that eclipses occur with a certain exact regularity just as Christmas and birthdays do, every so many years, days and minutes, so that anyone who has the records of the eclipses of thousands of years can predict them as well as the best astronomers, without any knowledge of their cause”.

WHY HOUSTON HAS A PROBLEM

There are many problems associated with the official explanation of solar eclipses.  However, this article will focus on the one, most glaring issue presented by the official explanation.  As previously, mentioned, according to all sources, heliocentric and flat earth adherents alike, the Moon and the Sun first “appear” in the East and “travel” West.  Both groups are in agreement as to this statement.

Both groups also agree that the solar eclipse of 2017 will appear in the West and travel East.  This is the one fact that completely destroys the concept that the Moon is blocking the Sun, thus creating the solar eclipse.  No matter how one formulates an explanation for the cause of a solar eclipse, one cannot explain how such a occurrence can be provided.

What is described as a solar eclipse can only occur if there is an object or objects that are separate and independent of the Sun and the Moon.   What then could explain the solar eclipse?

It is evident that a solar eclipse cannot be described as the Moon blocking the Sun.  Such a phenomenon can only be explained by the presence of a third object, independent of the Sun or Moon.  Indian Astrology maintained the existence of Rahu, the eternal enemy of the Sun and Moon, a third celestial body that eclipses them.  Wikipedia describes:

“In Hindu tradition, Rahu is a severed head of an asura, that swallows the Sun causing eclipses.  He is depicted as a serpent with no body riding a chariot drawn by eight black horses.  Rahu is one of the navagrahas (nine planets) in Vedic astrology and is paired with Ketu.  The time of day considered to be under the influence of Rahu is called Rahu kala and is considered inauspicious.  In Vedic astronomy, Rahu is considered to be a rogue planet.  The other name of Rahu is Bhayanka.  Astronomically, Rahu and Ketu denotes the points of intersection of the paths of the Sun and the Moon as they move on the celestial sphere.  Therefore, Rahu and Ketu are respecitively called the north and the south lunar modes.  The fact that eclipses occur when the Sun and the Moon are at one of these points gives rise to the myth of the swallowing of the Sun and the Moon by the demon snake”.

It is apparent that the explanation of what is described as a solar eclipse, by western astronomers, is erroneous.  One does not need an advanced degree in Astronomy or an elevated position at NASA to come to such conclusion.  One only needs to possess a minimal amount of common sense.

The most glaring element that disproves the official explanation given for the occurrence of the solar eclipse is the opposing direction taken by the object or objects, which create what is described as a solar eclipse, and the historic direction of the Moon and the Sun.  However, there are numerous other issues inherent in the official explanation.

We are told that a full Moon is presented due to the Sun illuminating the Moon.  How does this explain a total solar eclipse where the Moon appears as a dark object that blacks out the center of the Sun, leaving only sunlight appearing at its edges?  Also, the “solar eclipse” will traverse the contiguous United States in only one and a half hours.  This movement appears significantly faster than the amount of time it takes the Sun to cross the same contiguous United States.

There are many more problems presented by the official explanation of a lunar eclipse than those of a solar eclipse.  Such discussion may be suitable for a subsequent article.  There are various theories as to why such ridiculous explanations are given for the nature and machinations of the celestial bodies.  Some portend a sinister motive.  Others may attribute such explanations to bad science and group think.  Again, such discussions are more appropriate to subsequent discussions.

What is clear is that the official explanation of western astronomy for what is described as a solar eclipse is erroneous.   What is not conclusive is what causes such an occurrence.