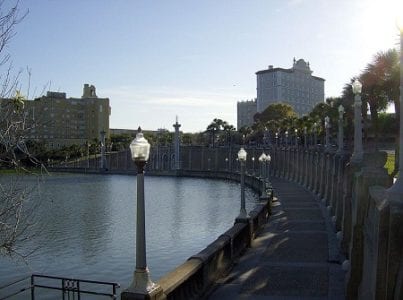 The Paleo-Indians came to the area known as central Florida and what is today known as Lakeland, Florida around the time of the end of the last ice age, according to Wikipedia.  It is estimated that such pre Colombian cultures existed in the Lakeland area almost 12,000 years ago.  According to this source, the Indians came to this area because they were searching for hunting and game opportunities.  The Indians stayed and their communities grew.

According to such sources, when the Spanish explorers and conquerors arrived at the peninsula, know known as the State of Florida, there were approximately 250,000 Indians residing on the peninsula.  Among the tribes that inhabited this region were the Timucua, Calusa, and Tocobago tribes.

These pre Colombian tribes became largely extinct, due to numerous factors including the harsh treatment of such Indians by the Spanish invaders, slavery, and disease such as smallpox and yellow fever, for which the Indians had scant natural immunities.  This is the account often cited by such websites as Wikipedia, and other popular sources for the diminution of the Indian tribes that inhabited what is now known as Lakeland, Polk County, and the greater Florida region.

This is the official history, as presented in public education institutions and popular history.  Although such descriptions may explain the demise of portions of the Native population, other less employed explanations may have had a larger effect on the reduction of the Native population, in the Lakeland, Polk County, Florida, and the greater region known as the Eastern United States.

It is the common practice of any imperial force to extract the resources from the subject territory or population.  Such resources include sources of energy, such as coal, oil and other resources, but also valuable commodities, such as gold, jewels, food crops, and spices.  Also among the resources typically extracted by imperial forces are the populations that are Native to the subject territory, through various forms of slavery.

It is estimated that as many as 10 million Natives lived in what is now known as the United States, at the time of the first Spanish explorers.  Some historians counter that the Native population was significantly reduced through the forced removal of the Native population to Europe, Africa, and the Middle East.

The early European explorers described the “copper colored” people that inhabited the Eastern portion of what is now known as the United States.   Such historians argue that the majority of the persons in the United States today that are referred to as African Americans, are in fact, descendents of the Indian tribes inhabited by the “copper-colored” Indians or the black Indians.

Wikipedia continues that there is little remaining evidence of such Native inhabitants in the Lakeland and Polk County area, except for some shell mounds and some personal artifacts.  Allegedly, such Indian tribes eventually merged with the Creek Indians who came from the North and later became the Seminole Indian Tribe.

In the 1930s, the Workers Progress Administration built the Lakeland Municipal Airport.  During World War II, the Lakeland Municipal Airport civilian flight school was employed in the training of pilots for the war effort.  Beginning in 1940 and ending in 1945, the facilities offered by the airport enabled the training of more than 8,000 Air Force cadets and Army Air Corps candidates in the operation of the Stearman PT-17 and PT-13 airplanes at what would later be named the Lodwick School of Aeronautics.

British Air Force cadets trained at the Lakeland Airport facility between 1941 and 1942.  The Lodwick School closed in 1945.  The location of the Lodwick School now houses the Detroit Tigers baseball complex.

Lakeland, Florida is currently, in the year 2017, the largest city in Polk County, in the State of Florida.  US News in a recent posting, ranked Lakeland, Florida as the 64th best metropolitan area to live in the United States.

The geographic location of Lakeland, its position in the center of the State of Florida, has enabled the growth of Lakeland.  Close to Lakeland, to the East, lies Orlando and Disneyworld.  To the West of Lakeland is Tampa, and the famous beaches of Clearwater, and its environs.

Lakeland, Florida contains the largest on-site collection of Frank Llloyd Wright architecture in the world, at Southern Florida College, in Lakeland. Florida Southern College President Ludd Spivey, in 1938, invited Frank Lloyd Wright to design what he described as a great education temple in Florida.  Allegedly, Wright labored on the project for over two decades, as Spivey scrambled to locate money and laborers in order to complete the project, against the demands for such resources, presented by World War II.

The original plan by Frank Lloyd Wright called for 18 buildings.  Wright designed 30 buildings but only 12 were eventually completed.

Mr. Wright called the project the Child Of The Sun, as the buildings appeared to come out of the ground, and into the light, as a child of the sun.  Allegedly, the site and its buildings attract over 30,000 visitors per year.

The Southern Florida Architectural District was registered as a historic place pursuant to the National Register of Historic Places, in 1975.  In 2012, the campus was determined by the National Park Service to be a National Historic Landmark.

Lakeland currently hosts the Central Florida Jaguars, which is an indoor football team, competing in the Elite Indoor Football Conference.  The Florida Jaguars play at the Lakeland Center.

The Florida Tropics is an indoor soccer team which is a member of the Major Arena Soccer League.  The Tropics also has a sister team that participates in the Premier Development League, which is an outdoor league.

Lakeland also hosted the Tampa Bay Rowdies in the 1980s.  In addition, Lakeland hosted a number of hockey teams including the Lakeland Loggerheads and the Lakeland Prowlers.  The United States Basketball League had a Lakeland franchise by the name of the Lakeland Blue Ducks.   Sun ‘N Fun houses Lakeland’s roller derby team, the Lakeland Derby Dames.

A number of classrooms located at Florida Southern College were used in the Adam Sandler movie titled The Waterboy.

The Florida Polytechnic Institute is located in Lakeland.  The Institute was designed by renowned Spanish Architect, Santiago Calatrava.

The annual International SUN ‘N FUN Fly-In & Expo appeals to flight enthusiasts.  It is the second largest event of its variety in the world.

In 2016, Lakeland became the home of the Miss Florida Beauty Pageant.  The recent Miss Florida, Courtney Sexton, resides in Lakeland.

The Polk Museum of Art is located in Lakeland.  The museum features the collections of such artists as Ansel Adams, Henri Matisse, and Marc Chagall.

The Lake Mirror Classic Auto Show is presented annually in Lakeland.  The event brings car collectors from throughout the southeastern United States.

One of the first Hindu temples in the United States is located in Lakeland.  The name of the temple is the Swaminarayan Temple.

One of the more notable persons who came from the Lakeland area was former Baltimore Ravens linebacker, super bowl champion and MVP, and two time defensive player of the year, Ray Lewis.  Mr. Lewis was a football and wrestling star at Kathleen High School.

Phosphate mining is an important component to the Lakeland economy.  Bone Valley produces 25 per cent of the phosphate mined in the United States.

Publix Supermarkets has its headquarters in Lakeland.  Publix is one of the largest supermarket chains in the State of Florida, with over 1,000 locations, in total.  Publix has over 6,500 employees in the Lakeland area alone.

The swans that inhabit the many lakes of Lakeland are a famous attraction to Lakeland.  The swans first appeared in Lakeland around 1923.  By 1954, the swans had largely disappeared, allegedly due to alligators that also resided in or around the lakes.

Allegedly, a Lakeland resident who was distressed by the diminution of the swan population, wrote to Queen Elizabeth of England.  The Queen provided a number of royal swans from her collection, the descendents of which now inhabit the lakes of Lakeland.

THE LAKES OF LAKELAND

Lakeland is appropriately named, as the city contains over 38 lakes.  Lakeland also boasts almost 40 parks, which are often adjacent to one of Lakeland’s lakes.

Jay Weller is an attorney with an office in Lakeland.  Since 1993, Mr. Weller has represented the many good people in Lakeland in legal proceedings, most notably in matters relating to bankruptcy and debt.  Mr. Weller and Weller Legal Group are considered by many in the legal community and larger community in Lakeland, to be the best providers of representation in matters relating to debt.  The bankruptcy attorneys, paralegals, and counselors at Weller Legal Group are experienced and knowledgeable in most matters relating to debt, including bankruptcy, foreclosure defense, loan modifications, debt settlements, credit repair, credit counseling, and tax workouts and negotiations.