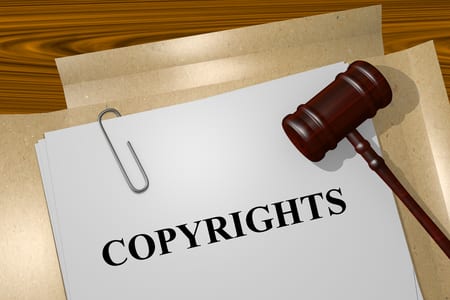 Under bankruptcy law, copyrights and patents are considered assets.  An author of a book who has copyrighted such book or a songwriter who has copyrighted his or her song or songs are considered under bankruptcy law, to possess an asset.  Depending upon the value of such an asset, a debtor may find such asset sold by the bankruptcy trustee in a Chapter 7 bankruptcy.  In a Chapter 13 bankruptcy, the bankruptcy trustee will want a determination of the value of the asset.  If such asset’s value exceeds the amount prescribed by the applicable State or Federal Exemptions, the debtor may be requested to pay additional monies to his or her unsecured creditors.

A famous bankruptcy case involving the copyrighted musical material of a debtor was the Chapter 7 bankruptcy filing of Toni Braxton.  Ms. Braxton filed bankruptcy in California in 2010.  The bankruptcy trustee entered the rights to 27 of her songs for auction, in 2013.

It appears that the bankruptcy trustee offered Ms. Braxton the opportunity of a “buy-back”, where the debtor essentially buys back his or her own asset or property, by paying the bankruptcy trustee a sum of money.  The buy-back was for $20,000.  Evidently, another party ultimately acquired the copyrights to 27 of Ms. Braxton’s songs.  This party now has the right to not only receive royalty payments from Ms. Braxton’s songs but also can market or use the songs in any way deemed appropriate or profitable.

Death Row Records, once arguably the most influential rap labels, with artists such Tupac Shakur, Snoop Dogg and Dr. Dre, filed for bankruptcy in April of 2006.  The documents filed in the bankruptcy court claimed that the Death Row catalog contained over 10.000 recordings from such popular artists, and others.  In the Death Row bankruptcy, Entertainment One Limited filed an initial bid of $23 million for the catalog.

In another bankruptcy, IPIX Corporation filed for Chapter 7 bankruptcy in 2006.  IPIX held more than 50 patents relating to imaging technology.  Eventually, Sony Corporation purchased the patents for $3.6 million in 2007.

Most creative works do not demand the prices bid in the Death Row Records case, or the IPIX matter.  Many songwriters or writers of books will copyright their creative product but realize very little or nothing in terms of a monetary return on their creation.  In such cases, although the copyright or patent is indeed an asset contained in the bankruptcy, such an asset may have little monetary value.  Depending on the determination of the market value of the copyright or patent, the debtor may be able to fully exempt the asset, meaning such asset would not be subject to liquidation in a Chapter 7 bankruptcy, or subject to the requirement to pay additional dividends to the unsecured creditors of a Chapter 13 bankruptcy filer.

There are various criteria that can be used in determining the value of a copyrighted work or patent.  One criterion is the type of bankruptcy filed by the debtor.  If the debtor files a Chapter 13 bankruptcy or a Chapter 11 bankruptcy, wherein the debtor seeks to retain the asset, and restructure his, her or its debts through a reorganization plan, then the copyright or patent will probably be viewed as an asset of a continuing concern or enterprise.

In addition, in a Chapter 7 bankruptcy, the bankruptcy trustee is under a certain pressure to sell or dispose of the asset in a quick and timely manner.  Such time constraints limit the ability of the trustee to obtain a more generous bid from a prospective buyer.

Another factor that affects the determination of the value of a copyright, patent or other work of intellectual property is the number of potential buyers.  What type of asset the debtor owns also affects valuation.

Does any other party hold an interest in the intellectual property?  Does the debtor receive royalties from the creative work?  Will the intellectual property retain its value, despite its liquidation in a Chapter 7 bankruptcy, and the removal of its creator’s motivation in the promulgation of the asset?  Another issue is whether the asset is the property of the bankruptcy estate or is contained in a trust.

Copyrights are enacted and governed by federal law.  Copyrights are actually one of the few duties specifically assigned to the federal government in the United States.  A creator of an original work, such as a song or a written work, does not necessarily have to copyright the work in order to protect it from unauthorized appropriation.

If a musician creates a song but does not copyright it, that does not mean another party can use the musician’s creative work, without authorization, license or ramification.  If the musician can prove that he is the author of the creative work, and the third party appropriated such work, the musician can bring an action for damages, and seek injunctive relief which prohibits the other party from performing or otherwise using, the creative work.    Such proof of the original work can be furnished, for example, by evidence of the posting of the song to youtube.  The youtube posting will indicate the date of the posting.  A subsequent work that closely resembles the original may be subject to litigation brought by the original creator.

The lack of a copyright may prevent the original creator from obtaining certain damages from the other party, such as punitive damages.  However, the original author is not stripped of all of his rights to protect his creative work, because he did not obtain a copyright.

So, the reader may want to make a conscious determination of whether a copyright is beneficial or necessary.  Not all creative works demand a copyright and not all inventions need to be patented.  In some situations, it may be more beneficial to not copyright an original work.  The songwriter who does not copyright his song may still elect to prohibit certain parties from using or appropriating his production.  The song without the copyright would exist in a strange state where the songwriter both does and does not “own” the song.

Theoretically, such song would not be considered an asset in a bankruptcy, as the copyrighting of the song essentially crystallizes a work that is amorphously held by the songwriter, into a determinable asset.  However, the songwriter still has the option to seek redress against those parties who use the work without authorization or license by the songwriter.

Before the reader undertakes such a strategy, it is best to conduct diligent research as to the operations, powers, and constraints placed upon limited liability corporations in the State in which such corporation will be incorporated.  The assistance and representation of a qualified attorney may certainly be beneficial.

In most States, if the creator, the trustee, and the beneficiary are the same person, the trust does not have full protective qualities against creditors or the bankruptcy trustee.  This is because the creator is taking his own property and placing it in a trust, that he manages, and of which he receives the full benefit.  If one was able to simply create a trust in such a manner to protect his or her own assets from creditors, it would be extremely difficult for creditors to take collection efforts against debtors.  The debtors could simply create their own trust, name themselves trustee and beneficiary and the creditors would have no recourse.

For such a trust to provide any meaningful protection against creditors, the creator of the trust would probably need to name an independent trustee and a separate party or person as the beneficiary.  For example, the songwriter may want to protect his asset, and enable his children to experience a possible monetary benefit from such asset.  He could name his children the beneficiaries of the trust.

As with limited liability companies, the laws regarding trusts may vary dramatically, depending upon which State the interested party resides.  Please have a firm understanding of how such entities are addressed within your State.

If you are in debt, we can help.  If you reside in the State of Florida and are confronted by debt, please contact our office.  We have every conceivable option and program to help our clients who have issues with debt.  These options include both bankruptcy and non-bankruptcy alternatives.