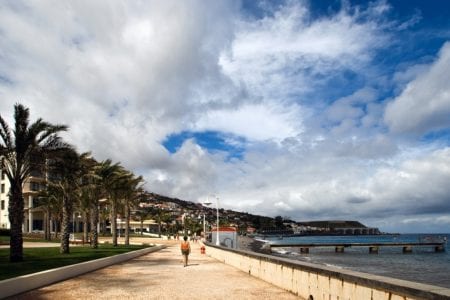 The City of Santa Cruz, CA is one of the latest municipalities to fall into what some have called a “…disturbing trend that will end in a full-fledged pension crisis” across the breadth and width of the nation.

Santa Cruz is a California coastal community of 65,000 residents situated some 75 miles southwest of San Francisco. The small city, home to the University of California at Santa Cruz, is heavily dependent upon year-round tourist trade and not much else in the way of economic support.

As of June 30, 2013, the city’s unfunded pension liabilities stood at $131 million. The city then had 777 payroll employees and 882 retirees receiving pensions (most retirees were on the higher-cost Defined Benefit plan). Like many other California municipalities, Santa Cruz is grappling with the rising costs of pension and healthcare benefits for future and current public-sector workers and retirees.

Likewise, the California state retirement system known as CalPERS (“California Public Employees Retirement System”) which is the primary umbrella organization that manages most state and municipal pension plans throughout California. In an article posted earlier on this blog (see TITLE 11, CHAPTER 9 BANKRUPTCY –MUNICIPALITIES & ISSUES OF UNFUNDED PENSION LIABILITIES) it was reported that:

by $433 billion over the past year and presently exceed $6

pension plans will continue to grow and threaten the financial security

of state retirees and taxpayers alike.”

The situation with CalPERS is not dissimilar to the national trend in that the current long-term investment shortfall is over $300 billion and growing (the $300 billion figure includes the CalPERS “sister program”, CalSTRS).

The annual pension contribution shortfall for the City of Santa Cruz is estimated at between $9 – $11 million (and growing). The present annual City pension contribution to CalPERS is pegged at $16 million – it is projected to double by the year 2025 to $32 million annually. A recent internal “financial status report” included a bombshell with regard to skyrocketing increases in health and retirement costs – in 2004, the cost was 28% of general fund salary costs; in 2015, those costs had risen to 43%; and, by the year 2020 those costs are projected to be 58% of salary.

As with many cities, counties and states across the nation, the “pension crisis” in Santa Cruz was a long time in the making. A May 14, 2011, article in the Santa Cruz Sentinel titled “Pension Precipice: Pain and promise of public pensions” foretold the looming problem. In Santa Cruz (the City and the County), one in six pension-eligible workers are on the government payroll. The problems began with the economic recession of 2008 – 2009 and worsened over the years since. The countrywide dilemma facing Santa Cruz is part of a broader statewide problem that emerged after the economic crisis at the end of the last decade. Once-rosy financial projections on the health of the state’s deep-pocketed pension funds encouraged improvements to worker benefits – often politically driven – that seem foolish in retrospect.

“Rosy” forecasts and projections turned to dust – and the taxpayers are left on the hook and will be for years to come. The annual bills that California’s largest pension funds now send to cities and counties have been sharply increasing over the past 5 – 8 years and the trend is likely to continue in the coming years. As far back as 2011, analysts estimated that public safety pension costs would equal one-third of their salary obligations for the cities of Santa Cruz and Watsonville.

The decisions of past administrators are also coming back to haunt cities like Santa Cruz. The 2011 Sentinel article noted that there were, at the time, more than 100 retired city employees receiving more than $100,000 in annual pension and healthcare benefits. The retired Central Fire Chief was taking down more than $223,000 in annual benefits. The “padding” of pension benefits for some turned on political decisions and other factors that, at the time, belied the recent economic recession and the need for municipal frugality.

The “golden handshake” nature and approach was good for some retirees but not for others. In Santa Cruz, more than 50% of pensioners were earning less than $20,000 annually in 2011; the median pension for retired teachers was $27,365, while the median for other retired government workers was substantially less at$18,539; and, the median for retired public safety personnel was $57,666. Quite a disparity back in the day and merely compounded in the years since.

In February of this year, the Santa Cruz City Council unanimously declared that a “fiscal emergency” existed in the city. A partial and hopeful solution comes in the form of a revenue-raising ballot initiative the Council placed on the June, 2018 ballot. The initiative seeks a quarter of a percent increase in the city’s sales tax to a capped total of 9.25% tax on sales in the city. In California, sales taxes are limited to a maximum of 9.25%. If passed by more than 50% of the city’s eligible voters, the additional sales tax would result in new own-source revenue to the city of approximately $3 million.

The “twist” on the council’s proposed solution is this – the increase would be funneled into the city’s general fund to pay for such services as police, fire, parks and the like. It would have little to zero impact on the city’s biggest problem, namely unfunded or underfunded pension liabilities. With deficits reaching as high as $23 million by fiscal year 2022, the city’s Finance Director has said that the increased sales tax revenues would “not eliminate projected city general fund deficits…” but would “…rather serve to reduce them”. The Finance Director cited three factors that are the root causes of future projected deficits: a years-long drop in tax revenues, state pension investment shortfalls, increases to ‘core’ city costs and increases to infrastructure decay.

At the same time, the Santa Cruz council renewed its defunct Ad Hoc Revenue Committee to consider and draft additional “progressive” tax ballot measures. The committee will consider the efficacy of increasing an existing city tax on hotel occupants as well as instituting a new tax on rentals by people who own and rent out a second home in the city. It is understood, generally, that “progressive taxes” place a greater financial burden on higher-income people and businesses while “regressive taxes” (i.e. sales taxes) more significantly impact lower-income earners.

Additionally, all municipalities will be negatively affected if the now-forecasted economic downturn comes in the year 2020 (the overall impact will be dependent upon whether or not the downturn comes and, if it does, whether or not it’s a “minor” one or something more long-lasting and significant).

The “root of the problem”: CalPERS & CalSTRS?

CalPERS’ 2016 annual report showed that as of June of that year the plan was more than $138 billion in debt. The CalSTRS shortfall stood at over $96 billion as of that same time. Today those combined shortfalls are in excess of $300 billion. As a pundit for the Sacramento Bee put it at the time, “California is great at making pension promises, but a dismal failure at properly funding them”.

The California system of “overpromising” and “underfunding” (pension plans) has caused a great financial burden on taxpayers, public employees and retirees, and cities large and small across the state. The state-level pension problems can be traced back to 1999, when the state legislature granted broad retroactive pension benefits to a large group of governmental employees without funding them. In the years that followed, many other factors (chronic underfunding, unrealistic assumptions regarding investment returns, etc.) have contributed to the skyrocketing pension debt. The effects at the state level have cascaded downward to have a huge negative impact on towns, cities and counties. In 1999, CalPERS had a surplus of $33 billion; today, as noted earlier in this article, the pension debt well-exceeds $138 billion ($300 billion when combined with the CalSTRS deficit).

Some 147 miles northeast of Santa Cruz lies the California state capital, Sacramento. The population of Sacramento is close to 500,000 (the larger metro area of Sacramento has a population in excess of 2 million). Population-wise, Sacramento is 87% larger than Santa Cruz, yet their pension-related financial problems look eerily the same; their dependence on CalPERS and CalSTRS is identical except for relative size.

The City of Sacramento currently pays around $67 million annually for pensions. The funding comes from the city’s general fund. By 2025, that figure is expected to reach $148 million, a jump of 45% in under eight years. As of May, 2017, Sacramento’s unfunded pension liability was $718 million and growing. Sacramento can’t keep up or catch up –today, CalPERS’ return on investments issix-tenths of one percent, down from a high of 18% in 2015.

Likewise, for many other municipalities – such as Santa Cruz – throughout the state of California. The following side-by-side comparison tells the tale of the pension crises in both Sacramento and Santa Cruz:

The above-figures show Sacramento’s population, annual obligations, and unfunded liabilities, in comparison with Santa Cruz as a percentage:

These figures are remarkable in that the two cities compare – across the board – in the same position vis-à-vis the pension crises despite the difference in size. A similar comparison with other cities might show similar results which would give credence to the universality of the pension problem and its pervasiveness.

So far, there is no indication that the City of Santa Cruz is contemplating bankruptcy. As far as small cities go, Santa Cruz is not (yet) “on the ropes” financially speaking. The City Council is acting in a proactive manner to stave off bankruptcy and the numbers don’t yet add up to warrant the filing of a Chapter 9 petition. The story will be different if the plans being laid today to ensure financial solvency – raising taxes, renegotiating contracts, paying off existing debt, etc. – fail or come up short.

Like so many of these contemporary stories of financially strapped municipalities, this one’s final chapter has not been written. Time will tell if the eventual outcome is a positive one or one laden with more bad news.