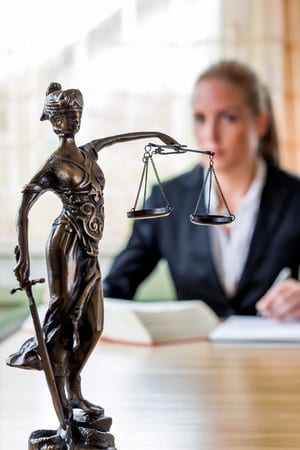 There are legal services that are specifically designed to assist those with low or no income.  Bay Area Legal Services often provides attorney representation to persons who are unable to pay for an attorney.  In my opinion, the services provided by such legal services are often quite competent, and having known a number of attorneys who have been employed by such services or programs, the qualifications and knowledge of such attorneys are also adequate, and often, exemplary.

Any person in the United States does have the right to represent themselves, in a court of law, without representation of an attorney.  There are certain exceptions to this general rule, as in cases where a defendant in a criminal matter is deemed incompetent, and unable to represent him or herself.  Also, a principle owner of a corporation often may be required to solicit the services of an attorney to represent the corporation in various legal matters.  However, in most cases, an individual may be permitted to represent him or herself in a panoply of legal matters and proceedings.

Therefore, while a debtor may represent him or herself in a bankruptcy, such a debtor is certain to confront many difficulties, and unexpected issues and problems.   Learning and understanding the numerous complexities of bankruptcy law is a difficult task for a dedicated and competent practitioner of bankruptcy law.  For an individual seeking to represent him or herself in the bankruptcy courts, such an endeavor is practically impossible.

An attorney is a member of a profession.  There are only a few professions that are present in our modern society.  Medical doctors are one profession, law enforcement officers another, and military officers another.  Theoretically, membership in a profession entails certain advantages.  Medical doctors and attorneys are typically among the higher paid participants in our national economy.  Sometimes, profession membership also bestows certain honor and respect by other members of our society.

With such advantages, comes certain duties and obligations.  An attorney who takes seriously his oath understands that it is his obligation and duty to help and assist members of his community in legal matters, irrespective of that persons financial standing.  Such obligation does not exist without boundaries.  An attorney cannot represent all of his clients without financial compensation, and continue to function in his or her profession.

However, for those attorneys or doctors who approach their profession as simply a measure to acquire outstanding wealth and financial privilege, such approach is malevolent and a violation of the greater meaning of membership in a profession.  It is a violation of both the clients’ or patients’ trust, and destructive to the meaning of a greater society.

If you are confronted with debt, considering whether to file bankruptcy, or do not know what to do, then please contact our office.  I will not charge you any attorney fee or money to speak with me.  I will give you full and honest advice regarding what I consider the best approach to addressing whatever financial ailment of difficulty is confronting you.  Such advice will not be affected by whether you decide to retain the services of my law firm.

If you are of limited financial means, I will attempt to construct a plan where you can afford to hire my office in the representation of yourself in either bankruptcy, or some other program we offer to assist those in financial difficulty or debt.

This is my promise to you.