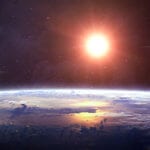 Here is a Video I took on an iPhone 4 camera, of a series of lights that appeared in the sky in Clearwater Beach, Florida, on March 26, 2016. The Video is a little over 2 minutes long, but the lights appeared in the sky much longer than that. The lights were either slow moving or did not move at all.

The Video was taken at Clearwater Beach, Florida. Specifically, the Video was taken from a fifth story condominium in the community of Island Estates, which is situated as the Intercoastal between Clearwater Beach, itself, and the mainland. In the Video, you can see a building in the background. There is also a disturbance of light from the opposing buildings and structures. The Video captures and I believe I remember, that the night was foggy that night.
That is about all I can tell you about this Video. Weather balloons? Natural disturbances of light? Aliens?