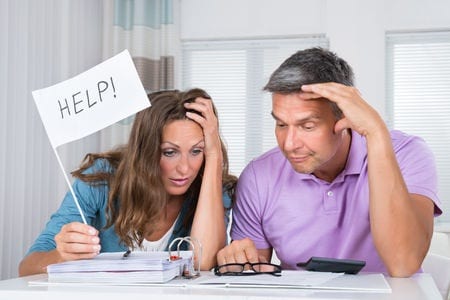 The bankruptcy code does not contain a definition of family or household size.  Under the 2005 Bankruptcy Abuse and Consumer Protection Act, Congress provided for the US Trustee Program or office, the authority to administer and enforce the means test which determines whether a debtor may qualify to file a Chapter 7 bankruptcy and determines what payment the debtor will make to the Chapter 13 trustee in a Chapter 13 bankruptcy.

Among the many detriments to the rights of debtors through the administration of bankruptcy processes, the Bankruptcy Abuse and Consumer Protection Act (BAPCPA) also participated in the willful expungement by Congress of its fundamental function to legislate, to make laws.  Family or household size in bankruptcy law should be first defined by Congress, in its legislative capacity.  The BAPCPA gave the power to the Executive Branch through the US Department of Justice, and through its agent, the US Trustee office or the US Trustee Program, to make such determinations.

Such action also removed a certain function and power of the Judicial Branch of government, or the US Bankruptcy Courts, to make such interpretations.  When an essential concept such as the definition of family or household size, as defined in bankruptcy, is left undefined by the Statutes established by the Legislative Branch, then the US Constitution expects that the Judicial Branch will offer definition when vagueness is present.  Such definition will come at least from the debate of an experienced bankruptcy attorney, generally against the definition summoned to the imagination of either the bankruptcy trustee or some other opposing party.  Such debate is open and recorded and under the guidance of a bankruptcy judge, who hopefully is waging his or her decision according to proper concepts of law and fairness.

For such power to be ceded to nameless bureaucrats is an affront to democracy and proper Constitutional principles.  It is also an affront and detrimental to the basic Constitutional principle of separation of powers.  The founding fathers, as it is presented, created the three branches of government in the US Constitution in the Legislative, Executive, and Judicial branches.  The concept is that each branch would have certain powers that are different in their nature, which act to balance the power of each branch against the other and prevent one branch from obtaining overwhelming power against another branch.  Such effect would presumably prevent the tyranny of one branch of government, over not only another branch of government, but also the population.

Before we define family or household size for purposes of bankruptcy, here is one final comment.  To name the changes to the bankruptcy code, the Bankruptcy Abuse, and Consumer Protection Act is almost laughable.  It is Orwellian in its naming.  The duplicity where the naming of one thing denotes the other.  Lies are the truth.

That being said, the US Trustee Program has released a statement that states:

Household size is the debtor, debtor’s spouse, and any dependents that the debtor could claim under IRS dependency tests.  The US Trustee Program uses the same IRS test for the definition of both household and family.

The US Trustee Program statement then refers the reader to IRS Publication 501 for the definition of dependent.  The Internal Revenue Service defines dependent as either a qualifying child or qualifying relative.

To be a qualifying child the child must be your son, daughter, stepchild, foster child, brother, sister, half brother, half-sister, stepbrother, stepsister, or a descendant of any of them.  Furthermore, the child must be under the age of 19 at the end of the year and younger than you or your spouse if filing jointly.  The qualifying child may be of any age if he or she is permanently and totally disabled.

To be a qualifying relative, the person cannot be your qualifying child or the qualifying child of any other taxpayer.  The relative must have a certain relationship with you as defined by the Internal Revenue Service or live with you all year as a household member and such relationship does not violate local law.  The relative’s gross income must be less than $4,000.  The debtor must provide more than half of the person’s total support for the year.

So why is it important to determine the family or household size under the new bankruptcy law?  The reason is when a debtor or the debtor’s bankruptcy attorney decides on the debtor’s available disposable income under the B23 test or means test in bankruptcy.

If the debtor’s income significantly exceeds his or her median income as determined by the means test, then the debtor is deemed to have sufficient disposable income, and as such, is not qualified to file a Chapter 7 bankruptcy.  The purpose of the BAPCPA is that only debtor who has such disposable income should have funds or monies to fund repayment to his unsecured creditors through a Chapter 13 plan or Chapter 13 bankruptcy.

Numerous strategic considerations come into play when determining the family size for purposes of bankruptcy and the means test.  If the debtor or debtor has a larger household or family size that are not employed or receiving any form of income, it is usually to his or her advantage to claim the larger household or family size for purposes of the means test, how it affects either a Chapter 7 or Chapter 13 bankruptcy.

However, the debtor may have many persons who may be of close relation to the debtor, and live in the same household as the debtor, but such persons have significant income.  Such an example may include adult children who work and reside with their parents.  In such instances, especially if the adult children make no or little financial contribution to the larger household, it may be of the debtor or debtors’ interest to claim a smaller household or family size.  The additional income of the other persons residing in the larger household may create a larger amount of disposable income for the debtor or debtors.

Jay Weller is a bankruptcy attorney in the State of Florida.  Weller Legal Group PA has offices in Clearwater, Port Richey, Lakeland, and Brandon, Florida.  Since 1993, Weller Legal Group has been considered by many in both the legal and wider community comprising the greater Tampa region, to be the premier law firm devoted primarily to the representation of debtors in Chapter 7 and Chapter 13 bankruptcy proceedings.  If you need representation in either Chapter 7 or Chapter 13 bankruptcy, please contact Mr. Weller today at 1-800-407-3328 (DEBT) or by email at jweller@wellerlegalgroup.com.