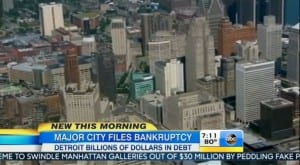 Pension Plans And The Detroit Municipal Bankruptcy Please read the preceding articles of this series on pensions plans and the Detroit municipal bankruptcy to gain a better context and understanding of this article.    The plan proposed by the city of Detroit in its municipal bankruptcy in late July of 2014, was accepted by approximately 82% of the Police and Fire Retirement System and by about 73% of the General Retirement System retirees and current Detroit employees. The majority of bondholders disapproved of the bankruptcy Read More +