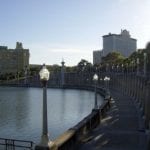 LAKELAND, FLORIDA EARLY HISTORY The Paleo-Indians came to the area known as central Florida and what is today known as Lakeland, Florida around the time of the end of the last ice age, according to Wikipedia.  It is estimated that such pre Colombian cultures existed in the Lakeland area almost 12,000 years ago.  According to this source, the Indians came to this area because they were searching for hunting and game opportunities.  The Indians stayed and their communities grew. According to such sources, when the Read More +